Northern Irishman coming in under the radar at Augusta National 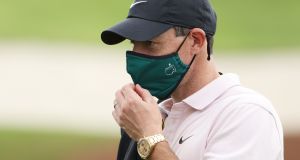 His emotions very much kept in check, meditative almost, Rory McIlroy exuded an almost zen-like demeanour; a sense of inner calm before whatever storm would come his way in the days ahead as the Northern Irishman finalised his preparations for a US Masters tournament that, so far in his career, has only brought rejection.

McIlroy has been in this place before, many times. Each year, his journey to Augusta National is like a pilgrimage to a scared place that, time after time, has failed to provide fulfilment. Maybe this time? As a new father, to Poppy, a fresh perspective has manifested. Facetime has become a ritual; his daughter, not golf, the obsession.

“I think it’s probably changed my outlook on life a little bit more. I grew up as an only child and an only child playing golf, so I feel like the whole world revolved around me for a long time, and now it doesn’t. It revolves around this little person that came into the world a few weeks ago, and it’s a nice change of pace. It’s different,” explained McIlroy.

Now 31 years of age, and with the maturity to pass on wisdom to younger players arriving onto the tour, McIlroy’s quest to complete the only missing link in the chain if he is to complete the career Grand Slam seems more measured this time around. Where each spring his arrival was accompanied by hype, this late-autumn stage has him - almost - coming in under the radar.

Why? Mostly because others have stolen his thunder. Bryson DeChambeau. Dustin Johnson. Jon Rahm. Back in March, McIlroy had returned to number one in the world rankings and then came the stoppage because of the coronavirus and then, on the resumption, the fire had gone. “Before the world changed,” is how McIlroy put it of that time back in the spring when he was playing consistent golf week in and week out. “After we came back out of the lockdown, there’s been really good stuff in there, but there’s been some lacklustre stuff too, lapses of concentration. You know, sometimes feeling like you’re out there and it doesn’t really count.”

It counts this week, and he, more than anyone, knows it. Since the heartbreak of his final round meltdown down in 2011 - “I learnt a lot from that day. I learnt a lot in terms of what I needed to be and what I didn’t need to be” - the return visit has brought with it expectations that it would be the time for redemption. It never was, not yet.

Maybe this time? The switch in dates has brought with it a slightly different course, softer and playing longer. Up his street, if we’re honest. “I feel good about my game. I’d say over the last two months I’ve worked on some technical stuff in my swing that I needed to. Swing was getting very flat and very deep underneath the plane on the way down. I feel like I had to sort of hang on to it through impact to hit it straight, where now it’s getting back down on plane, I feel I can fully release it and the ball is starting straight. I don’t have to feel like I hold onto it to hit a straight shot.

“That sort of has given me a nice bit of freedom throughout my swing. I don’t really have the fear of the left as I had sort of during the summer. This week, it’s take advantage of the holes that you can, play smart on the other ones. And if you can do that and think a little bit better and concentrate a little bit more, and just limit your mistakes, that’s always a good thing around here.”

In practice on Tuesday, McIlroy teamed-up with Dustin Johnson, a regular playing partner at the Bears Club in Florida, against Xander Schauffele and Phil Mickelson. McIlroy and DJ took the money, and Mickelson, for one, was impressed by what he saw.

Like McIlroy, Mickelson has one leg of the career Grand Slam to close the deal on. In his case, it is the US Open. And Lefty has no doubts that, one day, McIlroy will add a green jacket to his wardrobe: “The guy is as complete a player as there comes as well as smart, knowledgeable and works hard. So he’ll win and complete the Grand Slam. He’s too great a player not to. There’s nothing that I can really say to help him. He’s had a lot of great opportunities, and he’s going to continue to do so. He’s playing beautifully.

“I would be shocked if he wasn’t in contention with a great chance on Sunday. So whether it’s this year, whether it’s a few months from now, whether it’s a few years; I remember when I was trying to win a major, any major, and I struggled for many years, but I always knew and believed it would happen, and eventually at age 33 it eventually did. He has so many majors already and such a strong game that winning a Masters will happen. And when it does, I think he’s going to win a few,” said Mickelson.

McIlroy knows the score, knows more than anyone how hard it is to get over the line. He knows the history of the game. “You have to go out and earn it. You can’t just rely on people saying that you’re going to win one. Greg Norman never did. Ernie Els never did. There are a lot of great people that have played this game that have never won a green jacket. It’s not a foregone conclusion, and I know that. I have to go out and earn it and play good golf. I think nowadays, with how many great players there are, I need to play my best golf to have a chance.”

He knows. That is a wealth of knowledge.