One World: Together At Home event raises $127.9m for Covid-19 relief

Paul McCartney, Beyonce and Rolling Stones among the performers in eight-hour broadcast

Musicians like Stevie Wonder, Paul McCartney, The Rolling Stones Beyonce and Lady Gaga performed from their homes for the "One World, Together from Home" online concert. 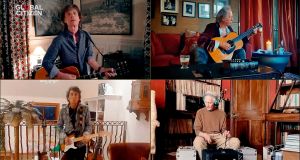 The One World: Together At Home event raised $127.9 million (about €118 million) for Covid-19 relief efforts, organisers have said.

An array of stars including Sir Paul McCartney, Beyonce and The Rolling Stones took part in the eight-hour broadcast, which celebrated health workers on the front line of the coronavirus pandemic.

Curated by Lady Gaga, the event attracted some of the biggest names in music, performing from their homes. The event began on Saturday, including a two-hour TV broadcast in the US presented by late night hosts Jimmy Kimmel, Jimmy Fallon and Stephen Colbert.

The project was staged in conjunction with Global Citizen and the World Health Organisation. Global Citizen tweeted on Sunday that the event had raised $127.9 million in support of healthcare workers.

Gaga opened and closed the broadcast, kicking proceedings off with a cover of Charlie Chaplin’s Smile. She was followed by Stevie Wonder, who sang Lean On Me in tribute to the late Bill Withers.

Rolling Stones members Mick Jagger, Keith Richards, Ronnie Wood and Charlie Watts all appeared from their respective homes to perform You Can’t Always Get What You Want.

Sir Paul sent a message of gratitude to healthcare workers, saying “we love you, we thank you”, before singing Beatles hit Lady Madonna. The rocker issued a call to governments around the world to strengthen health systems to prevent another crisis.

Beyonce broke from the uplifting tone of the other stars on show to highlight the deadly impact coronavirus was having on black Americans. She said: “Black Americans disproportionately belong to these essential parts of the workforce that do not have the luxury of working from home. African-American communities at large have been severely affected in this crisis.

“This virus is killing black people at an alarmingly high rate here in America.”

Billie Eilish was joined by her brother and musical collaborator Finneas for a cover of Bobby Hebb’s 1966 song Sunny.

Camila Cabello and Shawn Mendes sang a cover of Louis Armstrong’s What A Wonderful World, while Grammy-winning artist Lizzo sang A Change Is Gonna Come. Keith Urban was joined by wife Nicole Kidman as he performed a cover of Whitney Houston’s Higher Love. And to close out the show, Gaga was joined by Andrea Bocelli, Celine Dion and John Legend for a performance of The Prayer.

Footage from the One World: Together At Home concert will be shown on RTÉ and BBC One on Sunday night. – PA