Masters magic: The perfect Sunday round at Augusta National 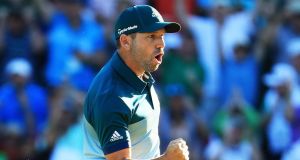 Sergio Garcia celebrates after making an eagle on the 15th during the 2017 US Masters. Photograph: Andrew Redington/Getty

A Masters Sunday provides no hiding place, no let-up and no excuses. You do it when it needs to be done or you spend another 12 months wondering how to get it done at all. With no Masters Sunday to bathe in this weekend, we thought we’d compile an aggregate of the best final rounds of the past 25 years. With a sole exception, these are the best 18 holes (plus play-off) played by the winners since 1995. Fingers, toes and lob wedges crossed that we get a Masters Sunday in November to compare them to.

A sneaky, hard hole with six bogeys by the eventual champion in the past 25 years, including Woods in 2001. Four years later, however, he ate it without salt. Starting the round three shots clear of Chris DiMarco, he outdrove his playing partner by fully 60 yards, leaving him 91 to the flag. A flick of a wedge to six feet, a drilled putt. Monstrous.

The one exception on this list, in that Oosthuizen didn’t go on to win the 2012 Masters. But a Sunday albatross that left him two shots clear of the field can’t be ignored. There have only been four albatrosses in Masters history and this is the only one ever seen on television. Oosthuizen blazed glorious four-iron 253 yards downhill, hopping on the front of the green and funnelling down into the hole on its last roll. Will never be bettered.

Despite being the shortest par four on the course, an upturned saucer of a green means it’s always hard to find a birdie on the third. On a day when five different players held at least a share of the lead at one stage or another, this was Johnson’s first taste of it. A curling right-to-left putt from 20 feet did the needful - Johnson was walking it in three-quarters of the way there.

A brute of a hole, with only two birdies by the eventual winner in the past quarter-century. Bubba Watson managed one in 2014 when the flag was in the middle of the green but the preference is for this one by O’Meara 22 years ago. He did it the only way you could in those days - a three-iron to a safe spot on the green and a 40-foot bomb.

For such a dull hole, the fifth has caught so many out down the years - Woods has bogeyed it on Sunday four out of the five times he’s won. Another hole that has seen just two birdies since 1996, Immelman made it look stupidly simple in ‘08. He swished a 171-yard approach that landed like there was a pillow just left of the hole and slid in the four-footer that remained.

Olazabal had held the lead for a full two days, until three straight bogeys looked like the wobble that was going to ruin his chance. A tricksy wind meant there had been only one birdie on the short sixth all day. Olazabal made it two, spearing his tee shot to 10 feet and holing the putt. Plenty of winners have birdied the sixth; none needed it more than Olazabal did just then.

For a while on the front nine, it was one of the wildest Masters Sundays. Five players were tied for the lead as Mickelson and Fred Couples played the seventh and another four were within two. With Couples four feet away and certain of a birdie, Mickelson had to hole a slippery cross-hill 12-footer to match him. He rolled it in, centre-cup, and from that point on the others all fell away.

Greg Norman wouldn’t start losing shots until the following hole but it was here that trouble started brewing. It was no big deal for Faldo to birdie the long uphill par-five - 11 of the last 25 winners have done so. But the contrast between how he went about it - straight drive, lay-up out right, regulation up-and-down - and Norman’s all-over-the shop par-save was a harbinger of things to come. Faldo had started the day six back and now he was within three.

You can’t close out the front nine better than this. Hitting up to the sloping green, most birdies are made by using the backstop behind the Sunday pin and dribbling down to the hole. Singh went directly at it instead and stopped his ball on a sixpence two feet below the cup. He turned in the lead and never let it go.

It didn’t make a whole pile of difference to the overall result - Spieth increased his lead from five shots to six with his birdie here. But it’s worth including if for no other reason than to glory in what a putter he was back then. His second shot had slid off to the left fringe but he still poured it in from 20 feet, dead-centre. Simple game when you do it like that.

Since 1946, only three Masters winners have birdied the 11th on Sunday. Jack Nicklaus did it in 1986 and the other two belong to Woods. But whereas in 1997 he was playing against himself, he stood on the tee in 2001 tied with David Duval and one ahead of Phil Mickelson. Nobody has ever made the 11th look easier - Woods almost holed out from the fairway and left a kick-in birdie. A couple of hours later, he held all four majors.

The most famous shot of Mickelson’s career came on the following hole, out of the pine straw, through the trees, to four feet. Problem was, he missed the eagle putt. He had made a far more difficult one 20-minutes earlier, down the hill towards the water, curling left to right, in the side door. It started a back nine run of four birdies in seven holes to win his third green jacket.

No winner has eagled the 13th on Sunday since Bernhard Langer in 1993. Of the endless birdies, Willett’s was a fairly humdrum two-putt from 40 feet but it stands out for the change it began on the leaderboard. He was five shots behind Jordan Spieth standing on the fairway but had cut that lead to three by the time he left the green. Within 20 minutes, he was leading as Spieth short-circuited on the 12th.

As the roars around the course signalled a Jordan Spieth charge, this was where Reed put an end to it all. Spieth had started the day seven shots behind Reed but had drawn level playing the 17th as Reed came up 14. Reed’s second shot to seven feet here was one of his best of the day and the putt moved him to -15, leaving him just needing to par home to win.

The shot of his life. Garcia and Justin Rose came to the 15th with the Masters between them. Rose was on -8, Garcia on -7. Rose hit first and left himself a routine two-putt for birdie. Garcia had to make his move now or forever hold his peace. His second shot landed a foot short of the cup and hit the flag, finishing five feet away. Eagle for him, birdie for Rose. Game on.

This was when it became clear. Woods had taken the lead on the previous hole, a two-putt birdie on the 15th while Francesco Molinari foostered about in the water. Here was where he hammered the nail home, playing a perfect Sunday tee-shot on 16. His 8-iron landed on top of the slope and the ball trickled down a foot below the hole. His fifth Masters was a formality from there.

Rory’s lost Masters, which is unfair on Schwartzel. The South African birdied the last four holes in a row to come from the pack on a day when eight different players held a share of the lead at some point. His second shot out of the rough here was a piece of delicate genius. Holing out from 10 feet put him in the sole lead for the first time all week.

If you’re going to win your first major, this is the way to do it. After a ding-dong battle with Ernie Els down the back nine, it all culminated with Mickelson needing a birdie on the last to win. His approach landed just past the flag and left him a 20-footer downhill. It was never anywhere else.

After spending the day trying to catch up to Louis Oosthuizen’s albatross, it took until this point for Watson to finally pass him. He did it with the mind-bending escape from the trees that only he could conceive of, snap-hooking a ridiculous sideways parabola to the 10th green, leaving a 12-footer for the win. Uniquely, gloriously mad.