Paul Dunne climbs leaderboard with a 66 at Italian Open 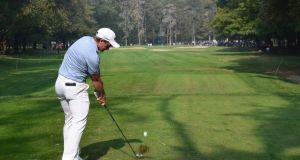 A third round 66 was enough to get Paul Dunne onto the fringes of contention at the Italian Open in Monza where England’s Matt Wallace leads the way by two.

A bogey at the first was the only blemish on Dunne’s card as he carded four birdies and an eagle from there to finish at 11 under par and six behind Wallace with one round to play in the Rolex Series event.

Wallace went into the third round tied on 13 under with Marcus Fraser at the top of the leaderboard and finished the day four shots better off.

The 27-year-old, who won his first European Tour title in Portugal earlier this year, carded five birdies and only one bogey, pulling off an impressive par save at the 18th.

“I’d say we’re probably only halfway there because Sunday is a different day,” Wallace said on europeantour.com.

“I’m going to go out, fight as hard as I can and hopefully be standing here with the trophy tomorrow.”

Molinari was in fine form in front of his home fans, birdieing the third, sixth and ninth holes and then picking up further shots at the 14th and 17th.

The Italian said: “I’m very pleased. I played very well. Obviously I know it’s going to be tough tomorrow but I’m in a good position.”

Hatton, celebrating his 26th birthday, fared even better than Molinari on the front nine with six birdies, including four in a row from the fourth.

His back nine was less spectacular but another birdie at the 14th saw him sign for a 65.

Hatton said: “I holed quite a few putts on the front nine and sadly I just couldn’t make the most of my opportunities on the back nine. It was a game of two halves on the greens but I’m in a good position going into tomorrow.”

South African George Coetzee and Kiradech Aphibarnrat of Thailand are a shot further back while the round of the day came from Tommy Fleetwood, whose 63 took him to 13 under.

It was a less successful day for Australian Fraser, who is five shots off the lead in a share of ninth place after a 72.

A one over par round of 72 from Graeme McDowell set him back to a tie for 58th at three under par.