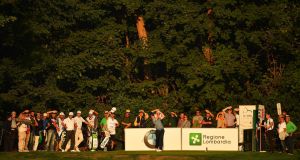 Paul Dunne of Ireland tees off during the opening round of the Italian Open at Golf Club Milano - Parco Reale di Monza. Photo: Stuart Franklin/Getty Images

A run of four birdies in a row on the back nine propelled Paul Dunne up the leaderboard at the Italian Open as his good form shows no sign of waning.

The 24-year-old comes into this week off the back of capturing his first European Tour win at the British Masters a fortnight ago before following it up with a tied-seventh finish at last week’s Dunhill Links Championship in Scotland.

On a perfect day at Parco Reale di Monza, just outside Milan, Dunne carded an opening round of 67 – four under par – to sit three shots off the lead in a jam-packed leaderboard where six players head the pack.

Rounds of 64 for Matt Wallace, Eddie Pepperell, Jamie Donaldson, Alexander Bjork, Kiradech Aphibarnrat and defending champion Francesco Molinari were enough to give them a tie for the lead in what is the fifth of eight events in the new Rolex Series, carrying a prize fund of almost €7 million with just under €1 million on offer for the winner.

Dunne is joined by a host of players – including Irish Open champion Jon Rahm and local amateur Stefano Mazzoli – in a tie for 17th place.

With sunshine and little or no breeze all day there was no real advantage in which side of the draw players found themselves on although for Dunne – playing in the fourth last group of the day alongside Hideto Tanihara and Nino Bertasio – the greens were beginning to get a little bumpy as the day drew to a close.

After starting slowly with a bogey at the third the Greystones man got under par with back-to-back birdies at the sixth and seventh to go out in 35. But the best was yet to come and, in the end, it all came in a four hole stretch.

A birdie two at the 12th was followed by another birdie at the 13th, a third in a row at the par five 14th and then one more at the 15th. Suddenly Dunne was five under and chasing down the leaders.

A bogey at the 16th scuppered his run but two pars to finish meant another satisfying scorecard and, with it, his 12th under par round in a row stretching back to the opening day at the KLM Open in mid-September.

Dunne is currently 13th on the Race to Dubai rankings with five tournaments left following the conclusion of this week’s event and will skip the Valderrama Masters next week in order to take a first trip home since becoming a European Tour winner.

Shane Lowry and Graeme McDowell were next best of the Irish at two under par after opening rounds of 69, while Pádraig Harrington sat well back at two over par after a round of 73.

As the Race to Dubai begins to draw nears its finale next month the top three in the current standings – Tommy Fleetwood, Sergio Garcia and Jon Rahm – were grouped together with the US Masters champion coming out on top.

While Fleetwood could only manage a level par round of 71 and Rahm equalled Dunne’s score of 67, Garcia looked close to his best in a round which included six birdies and a bogey to sign for a 66 and five under par.

The impressive play comes during what’s been a busy week for Garcia after first announcing that he is ending his 15 year relationship with Taylormade to join a new equipment manufacturer, before he and his new wife Angela followed it up with the news that they are expecting their first child.

Four birdies on the front nine saw the 37-year-old out in 32 shots before dropping one at the 13th but getting it back with further birdies at the 14th and 17th.

Home favourite Francesco Molinari – who took the title here last year – thrilled the huge crowds (for the third year in a row all patrons are allowed in free of charge ) with nine birdies and two bogeys in his round of 64.

Molinari told the European Tour website: “Obviously it was another good day. I started pretty much where I left off last year, so it was great.

“It’s great to see the crowds. I think there’s a nice buzz around the place and I’m happy and proud to be part of it.”