Rory McIlroy: ‘I want to be the best international player ever’

Meanwhile, Paul Dunne is now ranked as the second best Irish golfer in the world 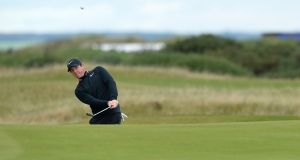 Rory McIlroy has set his sights on becoming the best non-American golfer of all time and plans to return stronger than ever after completing an injury-marred season that has seen the Northern Irishman drop to sixth in the world rankings.

With the latest rankings published on Monday, Paul Dunne is now the next highest ranked Irish player behind McIlroy after he moved up to 80th thanks to a tied-seventh finish at the Dunhill Links Championship to follow up his win the previous week at the British Masters.

That puts the 24-year-old from Greystones two places above Shane Lowry and closer to the all-important top 50 within which players are exempt for all events.

Despite picking up a cheque for €93,955 Dunne slipped down one spot to 13th in the Race to Dubai rankings as Tyrrell Hatton leapfrogged him into 11th thanks to his defence of the title.

After winning the PGA Tour’s FedEx Cup last year, McIlroy’s campaign was stalled by two separate injury layoffs and he signed off for the season in a tie for 63rd at St Andrews on Sunday.

The 28-year-old four-time major champion, who will now take a three-month winter break, said his first target would be to complete the career grand slam, which can be achieved next April at the US Masters.

“And then, try and become the best European golfer ever. Try and surpass (Briton) Nick Faldo (who won six majors) in that,” he said.

“If I had a career goal, it would be to be the best international golfer ever. Gary Player has nine majors. I’d like to think I’m going to give myself a chance to get close to that tally,” added the former world number one.

McIlroy will look to use his time off the course to fully recover from rib and back injuries that plagued him all season.

“My last round of 2017 sort of summed up all of 2017. Not much happening, good or bad. Just sort of stuck in neutral,” he said after signing for a level-par 72 at the Old Course.

“It hasn’t been the year I wanted on the golf course. I started with grand ambitions of trying to add to my major tally and trying to win golf tournaments.

“I haven’t won and the results haven’t been what I wanted, but I feel like I can still salvage something from the rest of this year, even though I’m not playing. I’ve given myself an opportunity to put a lot of good foundations in place.”

“I feel like I can do better than that in the next 10 years. That’s why I feel like these next three months are very important to put some really good things in place.”