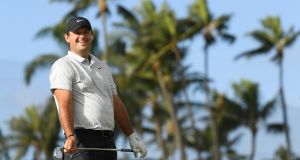 Patrick Reed of the United States practices on the range prior to the Sony Open in Hawaii. Photo: Harry How/Getty Images

Twelve years have passed since a banking executive took a prestigious golf club in the Highlands of Scotland to court after being suspended for allegedly cheating in a match. Decades earlier in the same part of the country, an individual collected a trophy for a competition he hadn’t played in. Upon the reality of that case coming to light, the gentleman in question emigrated to Canada. The common thread for these, and scores of other cases, is that the c-word even when attached to amateur golfers has potentially life-changing repercussions. Cheat on your partner by all means – brag about it in the clubhouse, even – but don’t mark a golf ball closer to the hole.

For Patrick Reed, an end-of-year jaunt to the Bahamas has ended up resonating beyond a guaranteed pay day, some sunshine and preparation for the following week’s President’s Cup. By the time Reed took to the course in Royal Melbourne – in an event hardly depicted by the smell of cordite – he had been called out by a member of the opposition team and suffered cat-calling from galleries.

The latter went on, and on, and on, until Reed’s caddie and brother-in-law snapped in retaliation during the penultimate day to the point where he was asked to sit out the final session. A sin-binned caddie – this is unheard of. Fast forward to Sunday in Maui, that notoriously hostile sporting environment, and a spectator bawled “cheater” at Reed on the final green of the Tournament of Champions. Quite what Reed may be subjected to at the Players Championship, where Floridians make drinking on empty heads a virtue, or the US Open, which takes place on the outskirts of New York, is anyone’s guess. Reed at least has the moderate comfort of a home Ryder Cup later in 2020.

How did we reach this point? Reed’s brushing of sand, twice, behind his ball in a waste area at the Hero World Challenge earned him a two-stroke penalty and the wrath of the golfing world. Essentially, Reed had improved his lie. The golfer’s own assertions – and he delivered this in a totally convincing manner – that he had no idea exactly what had transpired have cut little ice. “I think with a different camera angle they would have seen it was not improving the lie as I was far enough away from the golf ball,” Reed said.

So why accept the penalty? “It is my word against their word and because they only have one camera angle, I don’t really have a choice. After seeing it brush some sand, they thought that was a breach and, in the Rules of Golf , if you improve your lie, it is a penalty. At the end of the day you have to accept it and move on.”

Reed didn’t know he would be subject to a meeting with rules officials until he finished that round. When citing availability or otherwise of camera angles, the 2018 Masters champion would be taking an outrageous gamble if actually wanting to be certain there was no alternative footage (as did prove the case). Top level players now are subject to such scrutiny that actively seeking to break rules is futile. People watching the Reed match live didn’t notice anything unusual about his actions on the now infamous 11th at Albany.

The wave of indignity towards Reed has become more fascinating than the essentially minor matter that caused it. This has roots in the essential commodity of intent: sniping galleries and social media commandos are absolutely adamant Reed broke a rule on purpose, thereby seeking to gain an advantage. Reed himself says the opposite. How on earth can anybody, with certainty, contradict the Texan? And on the basis they can’t, this situation has become wholly disproportionate to the point of unfairness.

Reed is the major winner the US doesn’t want to love. Attitudes towards other golfers tell us all we need to know about that. Tiger Woods – whose personal indiscretions of old take cheating into a fresh stratosphere – was punished on four separate occasions in 2013, including at the Masters, because of incorrect drops. If Reed is under pressure amid the perception he isn’t sorry enough, Woods’s comments from the Barclays Championship should strike a chord. “I didn’t feel like I did anything [wrong],” he said. As Woods won his 15th major at Augusta National last April, sports fans exploded with joy.

It is therefore instructive and hilariously inconsistent how use of rules shape perception. You needn’t wander far through tales of Seve Ballesteros’s greatness to realise he had a penchant for bending scenarios to his advantage. This adds to the Spaniard’s legend. Dustin Johnson’s relief from a TV tower and deep rough in the crucial throngs of the 2016 US Open – which he won – remains iffy to those who believe in the spirit of rules as well as the black and white of them. If back stories are key, as has been implied regards Reed, then nobody chooses to look too closely at Johnson.

Was Jordan Spieth’s drop for the ages in the 2017 Open at Birkdale an act of genius or outrageous abuse of process? Bryson DeChambeau’s glacial pace of play, which erupted into a storm last season, isn’t defined as cheating when arguably it should be; such antics have a detrimental impact on other players in the field. Phil Mickelson can readily admit to wilfully breaching the rules of golf during the US Open of two years ago – the left hander started playing hockey mid-round – without any lasting consequence because … he is Phil Mickelson.

We could go on, even before starting on the vomit-inducing desire of Mickelson and others to beat a path to Saudi Arabia for a golf tournament where appearance fees equal the GDP of a small nation. Instead, Reed is berated for adjusting some sand – when nobody knows if it was intentional – and not subsequently behaving according to the “Here’s How to Act Post Penalty” manual.

The good news for Reed is that he never appears altogether bothered by external opinion. Yet if this issue doesn’t reflect well on him, it unquestionably looks worse for those so desperate to castigate or bawl. Golf can well do without them. – Guardian