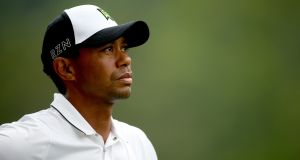 Tiger Woods: like some child actor, preparing him for every feasible challenge on the course often involved neglecting his life off it. Photograph: Darren Carroll/Getty Images

In December, 1996, four months before Tiger Woods won his first Major, he was the subject of a seminal Sports Illustrated profile by Gary Smith. The headline over the piece was “The Chosen One”, a daunting enough description for a rookie pro with a single tournament victory to his name.

Seven years later, the magazine used the exact same words, this time on the cover, emblazoned over the face of a high school basketball phenom from Akron, Ohio named LeBron James. Again, kind of prophetic language to be foisting upon a teen merely on the cusp of stardom.

At least part of both men’s record-breaking achievements since has managed, somehow, to live up to the breathless hype that prefaced their arrivals and attended their every move thereafter.

A pair of lifetime Nike endorsers, they have that and much more in common. Each has constantly been measured against an historic rival (Jack Nicklaus and Michael Jordan) and both are talked about as having the potential to become the first billionaire athlete. Yet, even after surpassing all the ridiculous expectations we had of them, this June, they are men on divergent paths.

As James makes his annual (well seventh consecutive) appearance in the NBA finals, Woods’ absence from next week’s US Open is even more poignant than usual given the personal travails that now apparently accompany his litany of physical woes.

Should, as seems likely, James fail to push the overmatched Cleveland Cavaliers past the Golden State Warriors, he will merely lose the NBA title. For Woods, judging by the tawdry police dashcam cameo, something much greater is at stake than the once obsessive pursuit of Nicklaus’ tally of 18 Majors. Remember when that was the biggest thing in his life.

It wasn’t meant to be like this. From an early age, Woods was groomed for greatness by his father Earl. All those celebrated overbearing training routines of his formative years, once regarded as crucial in producing a once-in-a-lifetime talent who reimagined how the game was played, well, they don’t look so edifying anymore.

Run your finger along any of the Tiger biographies and it’s suddenly all too obvious that, like some child actor, preparing him for every feasible challenge on the course often involved neglecting his life off it.

“I miss hanging out with my friends, getting in a little trouble,” 20-year-old Woods told Smith more than two decades ago.

“I miss sitting around drinking beer and talking half the night. There’s no one my own age to hang out with anymore because almost everyone my age is in college . . . my mother was right when she said that turning pro would take away my youth.”

But, here’s the strange thing. James gave up some of his youth too, turning pro straight out of high school. And, unlike the middle-class stability in which Woods grew up, his mother Gloria gave birth to him at 16 and he never knew his father. A peripatetic childhood defined by the constant search for a roof over their heads culminated in his mom sending him to live with the family of one of his coaches.

Tough circumstances, yet, the evidence so far suggests James seems to have coped far better with the pressures of fame and the vagaries of celebrity than his golfing peer. A couple of years back, James even cited his absent father as a perverse source of inspiration, motivating him to want to be a better person than that.

In stark contrast, Earl Woods wasn’t just overly-involved in every aspect of his boy’s development, he also placed unfair burdens upon Tiger. Remember, it was Earl who claimed his son had been sent among us, not just to change the game but to bridge the gap between East and West, to forge a new humanitarianism and to make a contribution beyond Gandhi and Mandela. As it turned out, all of Woods’ heroics with club in hand weren’t enough to seriously impact the demographics of golf.

Nobody ever charged James with the ludicrous task of transforming the planet or even changing the sport he plays. Free of unfortunate comparisons with historic icons, he has made a far more telling contribution to public discourse than Tiger.

Even before speaking out last week after a racial slur was daubed on the gate of his house, he has been consistently forthright on social issues from guns to police brutality. Taken in tandem with his more extensive philanthropic portfolio, guaranteeing to underwrite the college education of thousands of underprivileged youngsters in his home state for instance, the impression grows that James is engaged with the wider world in a way that’s proven beyond Tiger.

It’s not just that he’s picked the brains of Warren Buffet or taken weeks out of his career to do a star turn in an Amy Schumer movie, he has his own television and film production company, replete with an office in a Hollywood studio.

His partners in this and many other booming business ventures are a group of his childhood pals. While Phil Jackson derisively dismissed these lads as his posse last year, being surrounded by people who knew him back when he was dossing on their couches for a night can only have been invaluable over the past decade and a half in the spotlight

More and more it appears Tiger might have benefitted greatly from having a few long-standing friends watching his back.