McIlroy in red hot form as he heads to Pebble Beach 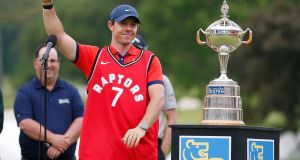 In Rory McIlroy’s case, hot form rather than the hit-and-miss nature of his previous US Open appearances – five missed cuts, including the last three championships, with three top-10s, among them a win in 2011, in 10 outings – is probably the best guide.

As such the 30-year-old Northern Irishman’s win in the RBC Canada Open is the better barometre: when he’s hot, he tends to stay hot!

McIlroy flew on to California on Sunday night after his latest success, the 16th of his career on the PGA Tour and his second of the season after adding the title to his Players Championship success.

With the US Open at Pebble Beach next on the agenda – where he is one of three Irish players in the field, along with Shane Lowry and Graeme McDowell – history tells us that he tends to continue playing well whenever he hits the winning trail.

Without a Major win since he annexed the US PGA at Valhalla in 2014, that streak of five years ago actually provides most evidence of McIlroy’s tendency to go on a winning roll once he starts to walk with that confident gait of his. That year he followed up his success in the British Open at Royal Birkdale with wins in the WGC-Bridgestone Invitational and then completed the three-timer at the US PGA Championship.

In winning in Canada the quality of McIlroy’s game was demonstrated by a 22-under-par winning total and a seven-stroke gap over runners-up Shane Lowry and Webb Simpson. Yet other numbers confirmed just how good he was – McIlroy ranked first in distance off the tee, second in greens-in-regulation and fourth in strokes gained/approach and sixth in strokes gained/putting

It might seem ironic that McIlroy’s only missed cut of the season came in the previous week’s Memorial tournament. But McIlroy, up to number three in the world rankings and to second in the FedEx Cup standings following his Canadian success, said: “I think that’s the thing that people don’t quite understand with golf at this level. The margins are just so fine and so small.

McIlroy’s approach coming into the US Open this week has differed from the two opening Majors of the season. He opted to take the week off before both the US Masters and the US PGA, finishing tied-21st at Augusta and tied-eighth at Bethpage. The Canadian Open was added to his schedule to give him a scorecard in his hands before Pebble Beach, and he will do likewise by playing the Scottish Open the week before the final Major of the season in Royal Portrush.

Most immediately to this week’s challenge at Pebble Beach (where he missed the cut in the 2010 edition), McIlroy claimed this latest career win as “more of an affirmation of what I can do when I play with complete freedom...even like The Players Championship I sort of had to grind it out. Conditions were tough. You’re sort of just hanging on, playing into the right spots, and I felt like this [time] I was free. I trusted myself 100 per cent, and I hit the shots when I needed to.”

McIlroy has been grouped with Marc Leishman and Jon Rahm for the opening two rounds in Pebble Beach. Shane Lowry is grouped with Tyrell Hatton and Gary Woodland, while Graeme McDowell will have Dustin Johnson and Phil Mickelson for company.