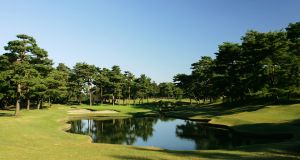 Kasumigaseki Country Club is due to host the Olympic golf tournament in 2020. Photo: Getty Images

The venue for the Tokyo 2020 Olympic golf tournament could have the event taken away unless it grants equal playing rights to female members, the International Committee (IOC) has warned.

The club is due to host the men’s and women’s tournaments in 2020, four years after golf was reinstated as an Olympic sport in Rio last summer.

But in an intervention that could result in more disruption to preparations for the Tokyo Games, the IOC’s vice president, John Coates, said organisers would have to find another venue if the Kasumigaseki club retained its discriminatory membership policy.

“We made quite clear that there has to be gender equality,” Coates told Reuters at the Asian Winter Games in Sapporo, northern Japan. “If they can’t achieve the gender equality then we have to get another course, but the organisers are very confident that they will.”

Japanese media said the club’s board had met last weekend but had failed to reach a consensus. All 15 members of the board must agree on any changes to the club’s bylaws. An earlier meeting also ended without agreement, with some members reportedly complaining that the club was being browbeaten into changing its rules.

“We discussed how we should respond after we ask our members how they feel,” the board’s chairman, Kiichi Kimura, told reporters after the meeting. “It’s extremely annoying the situation has evolved into what it is so quickly. Right now, we’re confused.”

The club is planning to discuss the matter again this Sunday, according to Kyodo news.

Critics of the club include the Tokyo governor, Yuriko Koike, who recently called on it to grant equal playing rights to all golfers. “I feel very uncomfortable that women cannot become full members in this day and age,” she said. “It should be a venue open to everyone.”

Coates, who is head of the IOC body overseeing preparations for the Tokyo Games, said: “They either will or they won’t (change the rules). There’s plenty of time to move to another golf course if we have to.”

Founded in 1929, Kasumigaseki has hosted more top-level tournaments than any other course in Japan. After being recommended by an existing member, prospective members must pay ¥8m (€66,745) to become a regular member, and an additional ¥4m (€33,372) to obtain full membership.

Alternatives to Kasumigaseki include the Wakasu Golf Links, a public course near Tokyo Bay that was originally considered as a venue for the golf tournament when Tokyo submitted its bid to host the 2020 Games.

Yutaka Morohoshi, vice chair of the nonprofit Japan Golf Council, said staging the golf competition at Kasumigaseki made no sense given its distance from Tokyo, and the fact that members of the public would not be allowed to play there after the Olympics.

“The Olympics is all about legacy, but we won’t have that if the golf tournament is played at a private club,” Morohoshi told the Guardian last month.

Kasumigaseki isn’t the only prestigious golf course struggling with gender equality. Muirfield, which has retained a male-only membership policy since it was founded in 1744, is holding a second ballot on whether to admit female members.

The club said the result of the postal ballot would be announced in the middle of next month. Muirfield attracted widespread criticism after a first ballot last year failed to secure the two-thirds majority required to change the policy.