Harrington still sticking to busy schedule, Dustin Johnson is top of the world and more 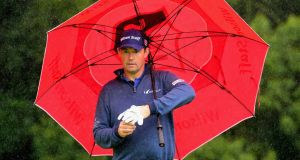 Padraig Harrington of Ireland lines up a putt on the 12th hole during a continuation of the second round at the Genesis Open at Riviera Country Club in Pacific Palisades, California. Photo: Harry How/Getty Images

In a sport which is all about number crunching, there was some honest talk from men in green blazers the other day after the GUI annual general meeting. On a question of why membership numbers (of men) in golf clubs had dropped, Rollo McClure, the GUI treasurer, replied: “Too long, too difficult, too expensive!”

Six words, succinctly spoken and directly to the heart of the affair.

The fact of the matter is that male golf club membership has dropped from a peak of 177,000 (over 18s) to a current level of 130,000 although the drop-off level for juniors (under 18s) is perhaps an even greater worry with a fall in such membership of almost 12 per cent in the last three years, from 21,000 to 18,500. In other words, fewer players at coming in youth level.

Why? Perhaps the attraction of team sports, and of how rugby, soccer and GAA are very much parts of communities up and down the country, is one factor. Money is another. “I think it is expensive,” admitted McClure. “When I was a junior, I paid three quid for the year. Now, they’re being asked for 300, 400 for juniors which I think is absolutely crazy.”

Has the fall in membership bottomed out? “You can’t say for certain” said McClure, adding: “It certainly levelled out as of October 2016, almost exactly same as October 2015 which was two per cent down on October 2014, so it does appear to have levelled out at this stage. I think there’s more pain to come, probably more in the North than in the South, but I wouldn’t be desperately optimistic.”

Pat Finn, the chief executive of the GUI, is more the glass half full kind of person on the matter making the point that participation levels aren’t as stark as membership levels as players have changed how they play the game with many of those dropouts opting instead to play socially with the reduction in green fees.

“I’m more optimistic, I think (the numbers) have levelled out. Golf, typically, is a sport that’s not open and accessible. The golf club is not the most accessible place in the community and there is the opportunity for it to become that. Golf clubs are making some innovative changes in that regard. I think we have an aging population and there is a serious opportunity to target the older people amongst our communities access golf and get into golf. I’m much more hopeful about the future. Golf clubs have corrected the model somewhat and membership is much more accessible,” said Finn.

Some would say he’s a sucker for punishment but, as a former champion, Pádraig Harrington – who faces the prospect of surgery on his shoulder – was never going to miss the Honda Classic, this week’s stop on the PGA Tour stateside.

Harrington will be playing for a fifth straight week and, after missing the cut in his first three outings, a tied-39th finish in the Genesis Open finally enabled him to get his FedEx Cup points tally up and running.

One of three Irish players competing in the Honda Classic, where he is joined by Graeme McDowell and Séamus Power, Harrington – who played with the aid of a cortisone injection in Los Angeles to aleviate the effects of a trapped nerve which has hampered his play for a number of months – has been told by a specialist that he requires surgery to “shave down” part of his shoulder. He has a window of opportunity immediately after the Honda to decide when and where that will take place but has been told it is a “straightforward” procedure.

There are also three Irish players in the field for the Jo’burg Open on the European Tour, with Paul Dunne – after a solid start to the season – seeking to consolidate his position in the Race to Dubai and hopefully kick on to contend for a maiden first win joined by Northern Irishmen Darren Clarke and Gareth Maybin, who is playing on a medical exemption.

“After I won the US Open, just kind of propelled me a little bit, got a lot of confidence in the game. I felt like the things I’m working on are paying off. So now getting to number one finally, obviously it’s a great honour and it’s just going to push me to continue to work harder” – New world number one Dustin Johnson doesn’t intend taking it easy any time soon.

“The biggest thing for me is not focus on the rankings. I’ve just got to keep trying to improve each and every week. I think my chipping and putting are finally coming along. The hitting will come, and if I can get that, I’ll obviously get back to winning form. You’ve just got to focus on winning, doing the right things, getting back to winning. If you do that, then it takes care of everything” – Jason Day, after losing his world number one ranking.

20/1: Dustin Johnson’s ascension to the world number one spot makes him the 10th player to hold that position since the rankings were introduced. The American won five and had 30 top-10 finishes in his 50 counting tournaments over the two year rolling period.

“People ask me what happened on 7th hole final day where I got the double bogey. I actually got “par” but called a 2-stroke penalty on myself”

“I was in the bunker and it was poorly raked, so in my backswing I touched a tiny hump of sand. Just me and my caddy saw it”

“So I walked up to the referee and told him what happened. Because it’s the right thing to do. I’m really proud of always being honest.” – Icelandic golfer Olafia Kristinsdottir, a rookie on the LPGA Tour, explains – in a series of tweets – how honesty is the best policy, even if the rules can at times seem utterly idiotic. She was playing in the Australian Women’s Open in Adelaide.

A: No. Player A could have refused to answer Player B’s question or replied that he would await B’s play before deciding his own tactics. The fact that A did tell B what he planned to do does not preclude A from changing his mind.