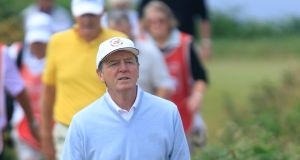 Des Smyth: “A lot of these young players, as good as they are, will go through difficult periods where they are going to need help.” Photograph: Phil Inglis/Getty Images

Once upon a time, a golfing magazine conducted a poll of players to ask who would be their model professional. The answer surprised very few, as Des Smyth won hands down.

Now, the two-time Ryder Cup star – and a winner of 25 tournaments worldwide – has taken on the role as leader of Team Ireland Golf with a view to helping fledgling professionals make it on tour.

Smyth now claims to be “semi-retired” having forsaken the Champions Tour in the United States, where there are up to 30 tournaments as season, to return to the European circuit with its 10 annual outings.

But he is now hopeful his experience will prove beneficial to those aspiring tour players in moving from the amateur ranks to the professional game.

In his own case, Smyth’s decision to turn professional back in 1974 was greeted with scepticism by a well-known golfing official who told him he would “starve” because he wasn’t good enough.

As it happened, Smyth’s move to the professional ranks was financed by a £6,000 bank overdraft – a not inconsiderable sum in those times – and his own self-belief and ability ensured such a “business plan” of playing golf would produce the dividends.

He added: “I see these young guys coming through, and they’re very talented. From tee to green, there is very little separates them from the stars we see on TV every week. Of course they won’t all make it but they need time to get out there, to challenge themselves, to test themselves and see what they can do.”

One of his first initiatives to help bolster the Team Ireland coffers is to stage a pro-am at Luttrellstown Castle in Co Dublin on July 10th, the day following the Dubai Duty Free Irish Open at Portstewart. There will be 24 teams – costing €5,000 a team to corporate sponsors – and it is the first step in Smyth’s aim to give what he calls, “something back to the game that gave me so much”.

The event will be staged at a venue where former tour player Peter Lawrie – who himself benefited from the Team Ireland funding in his fledgling days on tour – is the current director of golf.

“When you leave amateur golf, it’s a different world, and a lot of guys don’t realise how tough it is. Something like this is very necessary,” said Lawrie.

In his new, voluntary role, Smyth will serve as a mentor for fledgling tour players.

1 Jim McGuinness: There is a way to save championship and make it competitive
2 Waterford turn Kilkenny upside down and inside out
3 Waterford’s frenzied waves of attacks too much for Kilkenny
4 Sordid murder of hurling brothers still resonates in south Galway
5 Ireland’s work-ons: Four things Andy Farrell needs to address
Real news has value SUBSCRIBE