United States team celebrates its first win over Europe in nine years at the Ryder Cup with torrents of champagne. Anthony Kim beat Sergio Garcia to seal the trophy. 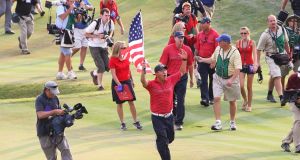 Anthony Kim of the USA celebrates with an American flag after the USA 16 1/2 - 11 1/2 at the 2008 Ryder Cup in Kentucky. Photo: Ross Kinnaird/Getty Images

On the first tee of the opening singles match on Sunday at the 2008 Ryder Cup, Anthony Kim assured the American captain Paul Azinger, “I’m gonna whup his ass for you.” A bold prediction for a 23-year-old rookie facing down Europe’s talisman Sergio Garcia to make. A couple of hours later, Kim sank a seven footer on Valhalla’s 14th, did an exaggerated fist pump and then strode off purposefully towards the 15th tee-box. He had only gone a matter of yards when officials intercepted him to tell him that the putt had actually given him a 5 & 4 victory over the Spaniard.

If Kim had been too focused to notice his demolition of Garcia was complete, he didn’t forget where he was when Azinger suddenly hovered into view. After sharing a hug, he pulled back, pointed at the captain and said, “I told you I was gonna whup his ass!” At the end of just his second full season on the Tour, Kim had been such an infectious presence around the victorious US squad in Kentucky that week that Azinger described him as the team leader and its “emotional juggernaut”. His youth, his effervescent personality and the nerveless manner in which he comported himself in the arena suggested here was somebody likely to bulwark the American team for a generation.

One decade on, Kim has never been back to a Ryder Cup and will never play in one again. It is more than six years since he teed it up at a competitive tournament, eight since he finished third at the Masters, and he no longer features in the age-old “best player never to have won a major” arguments. His initial disappearance from view in his mid-twenties was put down to the debilitating impact of a series of injuries that included a thumb problem, tendonitis in his left wrist and a ruptured Achilles tendon. When he didn’t return at all, however, the speculation started. The longer he’s been gone, the more outlandish it’s become.

“The sightings have the ring of myth,” wrote Alan Shipnuck, doyen of American golf writers, in an epic deep dive into the mystery for Sports Illustrated in 2014. “One night he is at his favourite bar in Dallas, So & So’s, sitting in the usual corner booth ordering bottles of Patron for a small entourage. Then he is in a private penthouse at the Dallas Ritz-Carlton, playing a private, big-money card game. Next thing you know he is on the range at the Madison Club in La Quinta, California or hitting balls at TPC Craig Ranch outside Dallas….Or at Costco in La Quinta with hair grown down the middle of his back.”

The stories about Kim were bound to be fanciful. Even during his brief stint in golf’s spotlight, he stood out from the crowd, not just due to his trademark diamond-encrusted AK belt buckle. At the 2009 Presidents’ Cup, he was spotted returning to the team hotel at 4am with a lot of drink on board and just five hours to go until he was due to take on Robert Allenby in the singles. After he was subsequently trashed by the Korean-American, Allenby sounded a tad bitter about his rival’s unorthodox preparation, “Maybe we should all take the theory of Anthony Kim, Get home at four in the morning, and then go shoot six under.”

If tales of his less than monastic approach to the sport served only to burnish his initial legend, his long-term absence has birthed a few conspiracy theories. Shipnuck reckoned a hefty, tax-free insurance payout (estimated to be between $10m and $20m) might be the reason Kim can never compete again. Earning that much on the course would require him winning double the amount, something that was always going to be difficult given the debilitating injuries he suffered and the multiple operations he endured. Kim, who won $12m on the course during his career, has denied the insurance story but that’s the best explanation posited thus far.

In the meantime, social media offers occasional evidence of him merely living the typical life of the superannuated athlete. Here’s a shot of him with long hair posing with a fan at a pet store. There’s somebody mentioning what fun he was to hang with at a charity golf event in Plano, Texas. There’s a photo of him nightclubbing in Las Vegas with a pair of professional poker players which revitalises the old tropes about his fondness for hedonistic partying and card games. And then, on Tuesday, a video appeared of him hitting golf balls at a driving range but that turned out to be from two years ago. There are also more mundane reports of him investing in a successful health care services company with a former caddy and other friends.

Why do people even care? Well, maybe because he was a player of preternatural ability (carding 11 birdies while shooting a second round 65 at Augusta) who looked for a fleeting moment like he might become one of the greats. Earlier this year, Golf.com surveyed current players, asking them to name which individual on tour has the most natural talent. Dustin Johnson finished first, followed by Bubba Watson, Tiger Woods, Rory McIlroy, and Justin Thomas. Anthony Kim polled sixth. That’s the company he keeps. Still.