US sport’s obsession with the military is commercial patriotism 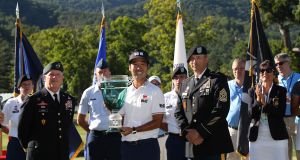 At one point in his speech at the Greenbrier resort in West Virginia on the eve of July 4th, President Donald Trump referenced Woody Williams, a 94-year-old veteran sitting in the audience. For storming a Japanese machine-gun fortification on Iwo Jima six decades ago, Williams was awarded the Congressional Medal of Honour. On this particular night Trump considered that feat of bravery, and then turned his attention to another guest.

“John Daly wouldn’t do that, and he’s pretty tough. John, would you do that? I don’t think so. Definitely hurt your golf game, John. That’s the end of golf.”

That Patridgesque cameo came moments after he’d compared the unassuming workaday attitude of ICE (the Immigration and Customs Enforcement agents most recently involved in separating children from their parents at the country’s southern border) to how Phil Mickelson, Keegan Bradley, Bubba Watson and Daly approach playing a round at a tournament.

Even by the baffling standards of the notoriously ad hoc Trumpian speechifying, here was a classic of his demented personal genre. A jumble of sometimes alarming, often sinister non-sequiturs strung loosely together by repeated references to the greatness of golfers and the historic might of the US military.

In between, there were free-form riffs on the impressive weight of the state governor (“I’m not going to say 450!”), the malfeasance of the country’s media, and the similarity between the way golfers and armies both need to get stronger just in case they need extra power. No, really. Only this president could pivot from eulogising so-called “clean coal” as a source of energy in bad weather (“you can rain on top of it for a long time”) to speculating that the biased press wouldn’t report it if he shot a round of 75 to wondering aloud whether his friend Mickelson actually likes him or not. In the space of a couple of insecure minutes. During a speech where he was supposed to be saluting the armed services on the night before America’s annual Independence Day celebration.

Trump was in West Virginia because the golf tournament formerly known as the Greenbrier Classic had been renamed and restyled as “A Military Tribute at Greenbrier”. The rebranding was both an attempt by one of the lesser stops on the Tour calendar to stand out from the crowd, and the latest example of a professional sport co-opting the US military for mutual promotional purposes.

Sure, the golf course can claim to have variously served as a hospital for returning second World War soldiers and as the location for a bunker designed to host members of Congress in the event of a nuclear war, but this is also just part of a pattern.

In the nearly two decades since September 11th, the fetishisation of the US military by teams and sports has become an intrinsic part of the culture. Every major game seems hallmarked by some jingoistic ceremony involving men in uniform providing guards of honour, fighter jets performing flyovers and patriotic eagles swooping into stadia. This obsession with the military-industrial complex was brilliantly lampooned in Ben Fountain’s 2012 novel Billy Lynn’s Long Half-Time Walk, a book about, among other things, what happens when a group of Iraq war heroes are guests of honour/recruitment props at a Dallas Cowboys’ NFL game on Thanksgiving.

Not long after that was published it emerged the government had paid clubs millions of dollars to highlight the presence of returned veterans in the stands at games, believing that the sight of them being lauded on the Jumbotron might inspire other young men and women to sign up.

The teams were only too happy to take their money then and continue to cash in in other ways too. At least once a year now, NFL and baseball players routinely take the field in some version of a camo jersey. If the fatigues-style is, as per the stadium announcer, “to honour those fighting to keep us free”, it also gets the tills ringing in the merchandise shop. Commercial patriotism.

As the ostracised NFL quarterback Colin Kaepernick has discovered, woe betide anybody who dares to question the unstoppable marketing synergy of nation, game and military.

Inevitably, those who haven’t worn the country’s uniform tend to take the whole business of soldiers as glorified extras before matches much more seriously than those who have actually served. And they also tend to big it up in a way that embarrasses veterans bristling at the obvious tokenism Perhaps nothing sums up this excessive tendency and the ersatz nature of American sport’s peculiar relationship with the armed services than Trump being invited to deliver an address prefacing a tournament now designed specifically to celebrate those who fight and have fought.

“From Bunker Hill to the beaches of Normandy and the jungles of Vietnam, Americans in every generation have given their least breath, their last measure of love, and their final moments on this earth in defence of their country and their countrymen,” said a man who received five deferments to avoid being drafted to go to Saigon.

The most famous of those was for medical reasons. A crippling case of bone spurs. Who better to salute the military?