America at Large: Golfers queuing up to be extras in the president’s tragi-comic farce 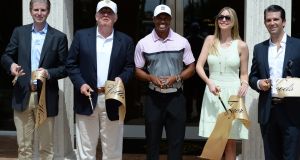 On his first day of kindergarten, some older white students in the school pounced on Tiger Woods, tied him to a tree in the yard, and used him for target practice as they hurled rocks and racial insults. He was five years old.

In 1990, he talked on camera about experiencing racism each time he walked into a major country club, the wary eyes of suspicious members tracking his every move. Little wonder that he name-dropped Dr Martin Luther King as one of his inspirations that day when he sounded like golf’s greatest hope. He was 14.

Yet, when he spoke to the golf media for 40 minutes on Tuesday ahead of his latest comeback at the Hero World Challenge in the Bahamas, he wasn’t asked a single question about the round. A dereliction of duty by all involved. While anybody who tees it up with Trump is guilty of empowering his carnival of the grotesque regime, Woods must know his willingness to collaborate carries a much greater significance.

How could it not?

The little boy tortured by his peers all those years ago chooses to yuk it up with a president for whom the dog whistle of racism has been a signature tune, this juvenile delinquent reserving all his most savage public insults for black athletes exercising their right to protest at NFL games.

The idealistic teen from that long-ago interview with Trans World Sport hanging with a reprobate who reckons there were “some good people” involved in the atrocious white nationalist protests in Charlottesville last summer.

It is baffling that Woods allowed himself to be used as political capital by the buffoon who dismissed Congressman John Lewis as “all talk and no action”. That’s John Lewis the civil rights icon who, when marching into history alongside Dr King (Tiger’s hero!), got his skull bashed in by Alabama cops during the protest at the bridge in Selma in 1965. Yeah, that John Lewis.

The temptation to dismiss this as just a round of golf must be resisted. It shouldn’t be explained away either by invoking the old Michael Jordan line that “Republicans buy sneakers too”. This isn’t about party politics or appearing neutral for business purposes. It’s about right and wrong. Not to mention Jordan may have been the most commercialised athlete of the 20th century but he never tried to sell himself as a racial mould-breaker.

“There are still courses in the United States that I am not allowed to play because of the colour of my skin,” said Woods in his first Nike ad in 1996.

Of course, professional golfers have always been a remarkably myopic lot. For decades, they ignored the historic racism and blatant sexism underpinning the dinosaur culture surrounding The Masters each April. They had to.

And not everybody is.

Steve Kerr’s father was shot dead by Hezbollah in Beirut and his grandfather saved thousands of Armenians in the Turkish genocide. He knows his history, learned about hatred the hard way, and chooses to use his platform as coach of the NBA champion Golden State Warriors to highlight the damage Trump is doing to the fabric of American society. Elsewhere, Gregg Popovich, the league’s most venerated coach, has lambasted the president for his divisive policies again and again.

“This man in the Oval Office is a soulless coward who thinks that he can only become large by belittling others,” said Popovich whose CV includes a stint as an intelligence officer with the US Air force on the Turkish-Syrian border in the 1970s. “We have a pathological liar in the White House: unfit intellectually, emotionally, and psychologically to hold this office.”

Contrast that quote with the silence of the golfing fraternity and the images of so many of them gurning alongside Trump, willing extras in his tragi-comic farce.

Then again, Kerr and Popovich are men of character and distinction. The best at what they do, just like their golfing peers. The crucial difference is they are unafraid to speak truth to power, much less legitimise it by association – which is exactly what Woods et al are guilty of doing.

Every golfer knows well that the pathetically insecure character in the White House craves the oxygen of publicity and the opportunity to hang with the world’s best, not least because he probably believes he could have been one of them himself if he hadn’t been so busy bankrupting companies in his youth.

By enabling his childish fantasies with a club in his hand, they are propping up his sinister administration, humanising the hatred he espouses and normalising the abnormal. He can’t be that bad if they like him, surely?

“Golf has shied away from this [race] for too long,” said Woods in 1996. “Some clubs have brought in tokens but nothing has really changed. I hope what I’m doing can change that.”

In golf, nothing ever changes. Least of all the golfers.