The K Club to Paris: How Ryder Cup first tees have grown 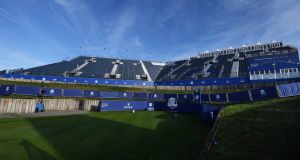 A general view of the first tee ahead of the 42nd Ryder Cup 2018 at Le Golf National in Paris, France. Photo: Ross Kinnaird/Getty Images

The Ryder Cup has become a monster. You only have to look at the sheer scale of the grandstand wrapped around the first tee to realise just how big it has grown. From a little horse-shoe stand which first manifested at The K Club for the 2006 match to this temporary structure at Le Golf National which will house some 6,500 fans.

As if that first tee shot wasn’t tough enough, the pressure has been amplified – a bit like the music speakers blasting out “Olé Olé Olé” and “Born in the USA” throughout the practice days – for players, among them five rookies on the European team and three on the United States side, with the fans in a stand that works its way skywards more akin to that found in a football stadium.

USA captain Jim Furyk has sought to prepare his men for what awaits on that first tee come the opening session. “Their crowd is phenomenal, they make a lot of noise. When we walk onto that first tee and they announce both teams, there’s going to be a nice applause (for the US players) and when they announce to two folks from Europe there is going to be a huge roar and those players are going to feel that presence . . . my players are trying to do the best they can to brace themselves and get ready for the battle,” said Furyk.

If this grandstand – which then morphs into the 18th grandstand as the two conjoin – is unlike anything that has previously been seen at the Ryder Cup, the pressure is something that has affected each and every player, especially on their debuts.

“It is hard to explain to someone who hasn’t had to hit that shot before,” explained Ian Poulter. “When I think back to 2004 (at Oakland Hills), the stand is nothing like what we have today. It’s going to be very interesting to see.”

Pádraig Harrington recalls how he could barely put the tee into the ground for his debut at Brookline in 1999 while even Tiger Woods tried to get out of hitting the first shot when he was paired with Mark O’Meara for his debut at Valderrama. “Basically it’s the final round of a tournament on the very first hole . . . . there’s a lot of nerves,” said Woods.

So too Rory McIlroy. “I still get nervous on the first tee, no matter what the tournament is. You try and put your ball on that tee and it takes you a couple of times to get it to settle on there . . . . but I’m excited for that. It’s become one of the very special things about the Ryder Cup, that first tee experience on Friday morning.”

For the rookies, it’s a tough ask, whenever that first tee moment comes. “The number one thing I’ve pictured since the Ryder Cup became a goal is that first tee shot. But nothing prepares you for the real thing. The grandstand is pretty big, there’s no denying that,” admitted Tommy Fleetwood, one of those rookies, adding: “It’s something that everybody wants in their career, so, as nerve-wracking as it is, and whatever those feelings are, everybody wants that in their life. You just have to take it on and let it all happen.”

Tyrrell Hatton has talked it through with Poulter. Another Englishman who sparks on the golf course, Hatton is as ready as he’ll ever be. “It’s very natural to be nervous, it’s a massive event. We’ve all been nervous in the past and done well, so there’s no reason why we can’t do it this week.”

A little throwback story shows just how tough that first tee shot can be. It concerns Mark O’Meara in the 1987 match at The Belfry in England, where he hit his first tee shot so far left it finished up in the tented village. “Where did that come from?” asked Curtis Strange. “I can’t breathe, I can’t breathe,” replied O’Meara, to which Strange retorted: “Are you kidding me? You better start breathing because you got me as a partner.”

Expect some more of the same here, with 6,500 pairs of eyes and lots of noise . . . and water all the way down the left for anyone who lets the nerves get to them.

1 James Ryan injury could open the door for Ryan Baird
2 Lockdown hiatus may afford way back for Waterford hopefuls
3 Brentford eye €178m windfall with Premier League promotion
4 Errol Tobias: ‘I wanted to show what was possible when you looked beyond colour’
5 Matt Williams: Time wasting and stoppages are making rugby unwatchable
Real news has value SUBSCRIBE