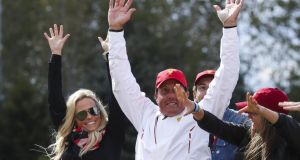 Spectators ringed the 17th green at Liberty National on Saturday, many of them yelling terms of endearment at Phil Mickelson. “Hoboken loves you, Phil,” one said. But Mickelson played his Presidents Cup foursomes match, a record breaker, primarily for an audience of three.

After his playing partner, Kevin Kisner, sank a 7-foot birdie putt to seal the pair’s 2-and-1 victory against Jhonattan Vegas and Emiliano Grillo, Mickelson was joined on the green by his wife, Amy, and their two younger children, Sophia, 15, and Evan, 14.

To attend the final two days of this biennial competition, the Mickelson children travelled from San Diego on Friday after their school let out. “That was so cool,” Sophia told her father as he gathered her and her brother in his arms.

With the victory, Mickelson passed Tiger Woods for the most wins, 25, in Presidents Cup history. Mickelson played in the event’s 1994 debut with a persimmon driver in his bag and Amy, then his girlfriend, by his side. It was two years before their wedding and five years before the birth of their first child, Amanda, who just started college at Brown.

Mickelson didn’t dwell on the record, because he doesn’t consider this weekend his final chance to create highlights in international team competition. “Right now,” he said, “I’m just trying to create more.”

During Thursday’s opening ceremony, Mickelson snapped a selfie with three former presidents: Bill Clinton, George W Bush and Barack Obama. That was a thrill, he said, but he left the distinct impression that he would treasure the photographs with his family more.

“My kids are at an age where they appreciate these moments now,” Mickelson said. “They couldn’t understand what it meant when they were little. Now that they’re teenagers, for them to share these moments means a lot to me. Plus, when they look at me like I’m cool, it means a lot.”

Those who consider Mickelson hip are not limited to his flesh and blood. Kisner, 33, who played with Mickelson in all of his matches the first three days, said: “I couldn’t have asked for a cooler partner, man. He was so much fun to be with. He never gets down, and he’s so positive out there.”

Another team-mate, Justin Thomas, marvelled at Mickelson’s longevity, as illustrated by his 12 Presidents Cup appearances and his record 54 matches with 16 different partners.

“It’s crazy to be that good for that long and to have the reputation that he does, being that much of a leader, a role model, in the team rooms,” said Thomas. “I don’t know if his record will ever be topped,” Thomas said.

Team events never get old for Mickelson, who is 47 but doesn’t quite act his age. Amy Mickelson said her husband and Kisner “had been giggling all week”. They got along famously, even though, as Kisner said: “He’s California. I’m redneck South Carolina. ” The partnership worked because of what they have in common, besides their competitiveness: a gift for gab.

In the early stages of each match, when Mickelson was most nervous, he said, Kisner’s chatter calmed him. “I talk a lot out there on the golf course to my caddie when I’m playing, and that’s kind of his release, too,” Kisner said.

“If y’all had a mic on us, y’all would’ve had so much content to go over, because we didn’t shut up for 53 holes.”

On Thursday, Mickelson missed an 8-foot birdie putt on the 18th hole that would have given the pair a victory in their foursomes match against Marc Leishman and Jason Day. Halving that match bothered Mickelson the whole night. The next morning, he told the US captain, Steve Stricker, that he couldn’t believe the putt hadn’t fallen.

“It was eating at him,” Stricker said. On Friday, Mickelson avenged his miss by making a 12-footer to secure a 1-up victory over Leishman and Day in the pair’s four-ball match. He and Kisner celebrated with a dance, facing each other, crossing their arms over their chests, then dropping their hands to their hips and finishing with a synchronised pelvic thrust – moves borrowed from the 1986 movie Three Amigos.

“I saw him practising it at one point,” Stricker said of Mickelson. “I said, ‘I don’t think that’s such a good idea.’ But Phil is Phil.”

On Saturday, as soon as Mickelson hit his wedge shot close on the 17th, the crowd near the hole began to murmur. If Kisner made the putt and closed out the match, what would he and Mickelson do next? They hugged – not one of those bro embraces in which shoulders barely touch, but a heartfelt, prolonged clinch. “We peaked last night,” Mickelson said with a laugh. “There was nowhere to go but down.”