Rory McIlroy: ‘Tiger Woods doesn’t have to prove anything to anyone’

‘If he doesn’t play again, he’s been the greatest player that I’ve ever seen’ 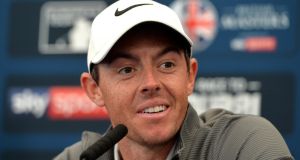 Rory McIlroy of Northern Ireland speaks to the media at a press conference during the British Masters at Close House Golf Club in Newcastle upon Tyne, England. Photo: Mark Runnacles/Getty Images

Rory McIlroy believes Tiger Woods can walk away from golf with his head “held extremely high” if he is unable to return to competitive action.

Woods has not played since withdrawing from the Dubai Desert Classic at the start of February and is currently recovering from a fourth back operation in the last three years.

And despite giving a positive update on his fitness just five days earlier, Woods acknowledged his career could be over during a press conference on Wednesday ahead of the Presidents Cup, where he is an assistant captain.

“Yes, definitely,” the 14-time major winner said when asked if it was a possibility. “I don’t know what the future holds for me.”

Speaking after an opening 67 at the British Masters, McIlroy said: “Only he knows whether he can do it and he’s taking it very slowly.

“I spent a bit of time with him over the past few months and he’s waiting on his doctors to tell him when he can do things again. He’s going to take their advice and not be maybe quite as stubborn as he was maybe back in the day.

“But look, if he doesn’t play again, he’s been the greatest player that I’ve ever seen. He probably played the greatest golf that anyone in my lifetime has seen. I didn’t really see Jack (Nicklaus) play. Jack has a better record but I don’t know if he played better golf.

“If this is it, he doesn’t have anything to prove to anyone. He can walk away from this game with his head held extremely high and he’s done wonders for this game.

“I don’t think there’s a single figure in golf who did more for the game in terms of bringing different groups of people into the game, different ethnicities, different age groups, made golf cool in the 90s, when it really needed an injection of something.

“So he’s a legend of the game and if this is it, then everyone should just applaud what a great career he’s had.”

McIlroy has spoken in the past of his friendship with Woods which has grown throughout their careers and their mutual endorsement deals with Nike.

Woods recently released a statement saying that he is hitting 60-yard wedge shots and is hoping to get back to full fitness but that there is no timeline. Wednesday’s press conference was his first public appearance since pleading guilty in Florida last month to a reckless driving charge.

The 41-year-old last played in early February in Dubai, where he shot a first-round 77 before having to withdraw owing to back spasms. Woods subsequently underwent back surgery in April, the fourth such procedure he has undergone since 2014.