British Masters: Irish trio all in contention ahead of final round 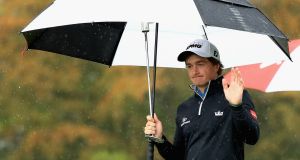 Paul Dunne of Ireland waves to the crowd as he approaches the 18th green during the third round of the British Masters at Close House. Photograph: Andrew Redington/Getty Images

Rory McIlroy admitted his competitive juices were flowing again after a superb 64 lifted him into contention for a first win of the year in the British Masters.

Fellow Irishman Paul Dunne - who is enjoying his best season of his professional career so far - is in a five-way tie for second on 11 under par, a shot behind Sweden’s Robert Karlsson, after a third round 65. While Shane Lowry is one shot back, tied with McIlroy on 10 under par overall.

At the start of the week McIlroy insisted he was unconcerned about the prospect of just the second winless season of his career, a season which will come to an early end next week.

But the four-time major winner’s bogey-free round at Close House equalled his lowest score of an injury-hit campaign.

“You get yourself into contention and you start to think about things and it would be nice to get a win,” said McIlroy, who chipped in for a birdie on the fifth and carded three more in a front nine of 31.

“Hopefully I’m in at least the last half a dozen groups tomorrow and it will be nice to feel that again.

“The crowds have been fantastic. The last couple of tournaments I’ve been off pretty early on the weekends and had 50 people following me, where there’s thousands out there so it’s nice to get into that sort of environment again.

“I haven’t shot a low score like that in a while, so it was nice to see. I had not really got off to a good start the last couple of days, so to be three under through six it was nice to get off to a start like that.”

Sweden’s David Lingmerth had earlier showed McIlroy and the rest of the field what was possible with a brilliant 62, the world number 107 having made the halfway cut with nothing to spare.

Dunne meanwhile hit four birdies on the front nine, with two more following his sole bogey on the 12th hole.

Lowry enjoyed a bogey free round of 66 with two birdies on the front nine, and two more on the way back in.

The Offalyman is hoping that he can turn around what’s been quite a frustrating season to date this weekend - last week a final round one-over 72 seen him fall back after being just three shots off the lead going into the Sunday. He will hope to maintain his form this time around.

A furious Ian Poulter remained in contention for a first victory in five years - he recovered from an early double bogey to card a 68 and finish among that five-way tie for second.

The former Ryder Cup star found the water with his tee shot on the par-three fifth after being distracted by spectators taking pictures on their phones and was still seething hours later.

“What are we doing?” an irate Poulter said. “We’ve allowed them all to take pictures and videos and tell them to put them on silent, and it doesn’t work does it?

“You get distracted on the wrong hole at the wrong time and it’s extremely penal and it’s really f****** annoying.”

Asked if mobile phones should be banned — as they are at Augusta National for the Masters — Poulter added: “No, I just think people need to educate themselves and understand it’s an issue for us and them.

“They don’t realise they distract us as much as they do. Ninety nine per cent of them are on silent and unfortunately there’s a couple which are not. You’re not expecting it because you think they’ve got it on silent.

“I’m angry and am going to continue to be angry until I wake up tomorrow morning. Throwing shots away for no reason is really annoying.”

Karlsson’s last European Tour title came back in 2010, but the Ryder Cup vice-captain’s 67 was enough to leave him a shot ahead of Dunne, Poulter, Tyrrell Hatton, Graeme Storm and Richie Ramsay.