McIlroy v McGinley: The days of ‘shut up and dribble’ are gone 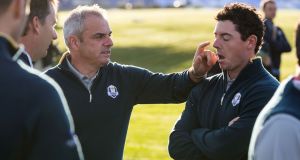 Paul McGinley has suggested Rory McIlroy would be better off focusing on winning major golf tournaments rather than politics. Photograph: Getty Images

Boiled down he suggested the world No. 1 would be better off keeping his mouth shut and focus on winning major golf tournaments rather than sticking his oar into politics.

It’s fair to say it hasn’t taken long for those comments to be overtaken by events.

McGinley cited Tiger Woods, Michael Jordan, Lionel Messi and Cristiano Ronaldo - “all of the greats” - who have kept their heads firmly below the political parapet. They might have had views, he said, but kept them private because they understand the focus required to reach the top and don’t want distractions.

Asked if McIlroy’s readiness to address wider issues might take away from his performances, he suggested being the best requires desire and not drawing attention for stuff that isn’t golf-related. He finished off with “you get the impression that he has a wide mind and isn’t singularly focussed like some of the greats in sport have been. You get the sense that his world is a lot bigger than that.”

As backhanded compliments go it’s a beauty. It was more evidence of a rather tetchy relationship between the two men. There was ‘feeling’ about McIlroy’s decision to skip last year’s Irish Open which was hosted by McGinley. The latter has regularly, and to his credit, not held back in criticism of McIlroy in his role as a media pundit.

For a media mostly working with more anodyne material such a spat would ordinarily be a godsend. The times though are anything but ordinary. Instead they’re changing with a vengeance when it comes to high-profile figures venturing opinions outside of sport. Unfortunately for McGinley, in just over a week the tone of his words managed to transform from hard-nosed to tin-eared.

Actually it’s kind of dirty pool to bring it up. It’s not like McGinley hasn’t got bundles of evidence in relation to elite sportspeople keeping the head down, focussing on goals, keeping their eyes on the prize, controlling the controllables, and scooping the big ones. This is hard-wired throughout sport. It’s an instinct most are happy to follow and many fans demand it.

Woods has spent decades keeping so politically neutral he makes Switzerland look like North Korea. Michael Jordan famously pointed out in his pomp that Republicans buy sneakers too. It was a snappy line that anyone could appreciate back in the day. Now it just seems like a spectacularly tone-deaf cop-out.

It’s surely even more selfish to presume athletes should devote themselves entirely to nothing else but victory and defeat, something that reduces sport to nothing but a tot

Both men have criticised the police action that resulted in the death of George Floyd in Minneapolis. Jordan said he stood with those calling out “the ingrained racism and violence towards people of colour in our country. We have had enough.” Such a statement reflected global outrage at Floyd’s death and the momentum behind ‘Black Lives Matter’ protests around the world.

Jordan is still a famous name but he’s retired nearly 30 years. Woods has already completed a miraculous comeback from injury. It’s been pointed out how their reputations are made, the suggestion being that it’s easier to voice their opinions on issues outside the sporting arena now, even more so perhaps if they’re trending.

A sign of the urgency of the moment however is the readiness of figures very much at the peak of their careers, and across the sporting spectrum, to speak out.

The awful synchronicity of the manner of George Floyd’s death and Colin Kaepernick taking a knee in protest at police brutality can’t have been lost on anyone. It makes the tired told trope about sport being separate from wider social and political considerations seem at best indulgent and at worst deeply cynical.

Revulsion at George Floyd’s death has been reflected in a depth of disgust everywhere including in sport. In fact there’s an argument that such a visceral political moment in time is too important for ‘celebrity’ to attach itself to it. It’s an understandable point but one that ignores the platform sport affords across every issue.

Muhammad Ali and Billie Jean King are just two figures who became the best in the world in their sports while also trying to change that world for the better. The two aspects weren’t incompatible. Both suffered financial consequences for the courage of their convictions but became revered figures far beyond sport.

Generations following benefitted from their actions, allowing many of them the luxury of being able to afford to keep their views private. That’s fair enough. The game that no one’s allowed not play is a different kind of tyranny. But the idea that those choosing to voice an opinion outside of their sport are indulging in some form of dilettantism is off-side.

Whether you think it’s a good thing or a bad thing will always mostly depend on whether you agree with what’s being said.

For many McIlroy having a pop at the chancer in the White House underlines the world No. 1 golfer’s capacity to utter a lot of good sense. Others will disagree on the basis that being able to swing a golf club, or kick a ball, or run fast, doesn’t make one any kind of Montesquieu.

Perhaps the ugliest example of that position was the infamous advice offered to LeBron James, the world’s finest basketball player, after he dared to cross the divide. It came from the Fox news anchor Laura Ingraham who, in a moment of stunning stupidity, advised him to “shut up and dribble.”

Well the genie’s out of the bottle on that one. At a time when politics seems broken, the days of ‘shut up and dribble’ are gone. Maybe selfishness is required to be the best. We’re often assured it is. But it’s surely even more selfish to presume athletes should devote themselves entirely to nothing else but victory and defeat, something that reduces sport to nothing but a tot.