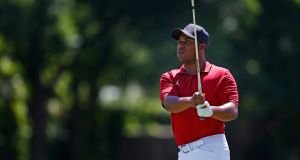 Harold Varner III of the United States plays a shot on the 16th hole during the first round of the Charles Schwab Challenge. Photograph: Getty Images

If Harold Varner spends Sunday evening in Texas posing with a trophy, we will have been supplied further evidence of sport’s propensity to deliver moments that scriptwriters would reject as too fanciful. If golf is true to a rising commitment, Varner won’t find himself in rare company for too much longer.

Before the PGA Tour made this comeback following a 91-day absence, at the Charles Schwab Challenge, Varner was in recorded and meaningful conversation with Jay Monahan. The PGA Tour’s commissioner has committed to “amplifying voices and efforts to end systemic issues of racial and social injustices” following the horrific death of George Floyd. Varner is integral to the discussion as one of only three black American players who routinely feature on the PGA Tour.

The amiable 29-year-old, who once chased Tiger Woods for an autograph, has not yet won at this level; what a tale it would be if Varner further laughed in the face of prehistoric attitudes by prevailing at Colonial Country Club. So far, so good on that front. Varner’s opening round of 63, seven under par, meant he joined Justin Rose atop the leaderboard.

“I just want to play well,” said Varner. “The platform I have is through golf so I have to focus on that.” In Varner’s only other appearance at this tournament, he missed the cut. Eighteen greens in regulation, then, represented quite the turnaround.

Monahan stood with head bowed on the 1st tee as the clock struck 8.46am. This pre-planned moment of reflection was introduced – and shall remain for the next three days – following events in Minneapolis. It will take more than golf to heal the gaping race relations wound in the United States but this sport – where white men dominate – appears to have discovered a new level of consciousness.