Increase in membership a plus for adapting golf clubs 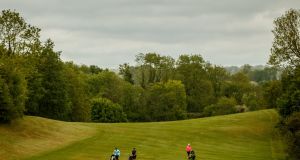 Members play at Esker Hills in Offaly after clubs reopened on May 18th. Photo: James Crombie/Inpho

Think of it like a golfer faced with an approach shot to the green, except there happens to be a copse of trees directly in the way. Do you boldly attempt to fire over the top? Or do you go for the hit-and-hope shot, believing in the old adage that trees are 90 percent air? Or, perhaps, shape the shot around the trees, either cutting or drawing the ball with imagination and execution?

In these times, golf clubs have had to adapt, to think a little outside the box in an effort to keep the show on the road.

Unfortunately for some clubs, the opportunity to adapt such changes have gone. Water Rock in Co Cork along with Killorglin and Castleisland in Co Kerry didn’t reopen.

Although golfers all over the island returned to the fairways last month in a phased reopening, clubs – without the benefits of income from food and beverages with clubhouses remaining closed – have, at least, found membership queries increasing as players either return to the sport or, limited in their other pursuits, seek to take up golf for the first time.

Clubs the length and breadth of the land have been innovative in terms of opening up membership. For example, Donabate Golf Club in north Dublin has promoted a category of “Introduction” membership for €75 per month with another “Intermediate” category (for players between 20-30 years of age) for €30 a month. Mullingar Golf Club in Co Westmeath has a membership deal for newcomers of €350 up to October 31st.

Beaufort Golf Club in Co Kerry had such a response to their membership offer – €550 to December 2021 – that they had to stop taking any further new members on May 24th in what the club described as “a fantastic response” to their drive.

Since golf was allowed to be played again, the numbers – even though Phase One in the Republic confined play only to those residing within 5km of their club – have been impressive. Mark Ruddy, the general manager of Lucan Golf Club, calculated that that in the first two weeks of play since the restrictions were eased saw 92 percent untilisation of the time sheet at the club compared to a 56 percent take-up on the same period last year.

The general spike in membership applications can be attributed to a number of factors, among them the fact that golf is one of the sports allowed in the early releasing of restrictions – “I can’t keep up with the enquiries,” is how one general manager put it, “we’ve had enquiries across all categories of membership. There’s no GAA, rugby, soccer, that’s where it is all emanating from” – while, unquestionably, the fine weather has also helped.

Marty Carr, the chief executive of Carr Golf, which has commercial and maintenance contracts with almost 30 clubs – among them Elmgreen, Corballis and Grange Castle in Dublin, Charlesland in Co Wicklow and Seapoint in Co Louth – described the increase in membership applications as “an unforeseen benefit” but one that had come after a difficult period for clubs. “You had no real March, April, May, so it was nice to see some compensation on the other side,” he said.

He explained: “A lot of golf clubs would have really struggled in losing those months. Historically, from St Patrick’s Day to the Masters at Augusta is when the golf season launches and that’s gone this year . . . people are thinking, ‘I am not going away this summer, I am going to end up playing a bit more golf’. Things aren’t going to move indoor very quickly, look at soccer, rugby and stadiums and concerts, so it is just a shift in people’s mindsets that this is around for a while and golf is a very safe activity. It is a commitment, it is a positive sign.”

One other thing which has helped clubs get going again is that only members have been allowed play in the first phase of the relaxing of measures and the demand is such that Carr observed, “Timesheets for a week are filling up in 18 minutes . . . . the difficulty for clubs is, notwithstanding the new membership incomes, (clubs) are operating at 50 percent capacity because you have no food and beverages (income), no merchandise to speak of really and you have increased costs with Covid. You can put a positive spin on it, but we’re not out of the woods yet.”

The impact of the pandemic has forced the hands of all clubs, with all bookings now done online while the other thing is that clubs have gone cashless which are fundamental changes that will most likely be incorporated into business practice going forward. “It is going to be a long road for golf, we’ve seen a few closures already but certainly it is great to get the wheels in motion,” said Carr.