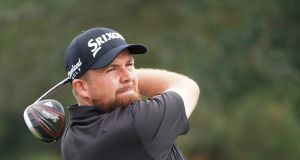 Shane Lowry’s rather dismal performances at past Masters tournaments are something of a mystery, especially to him.

In his four previous appearances at Augusta National, the 33-year-old Offalyman has failed to survive into the weekend three times and, on the one occasion he did, he finished a lowly tied-39th (in 2016 when Danny Willett upset the odds to win).

“I’ve never driven the ball well around here, and that’s kind of strange. I’ve struggled on the greens in the past, so it’s kind of a bit of both,” said Lowry of his past efforts and hoping that the enforced switch to a November setting, a little cooler than April and with rain forecast through the tournament, might improve his chances.

Still, if you ask Lowry about his favourite courses, Augusta National is one of those at the top of his list. As he put it: “Everybody loves it here, whether you’ve had success or not around here, this is I think the majority of people’s favourite place to play golf. This is my fifth Masters, and I don’t think I’ve ever shot too many great rounds around here. I’m hoping the time of year kind of changes my luck around here and (also) probably coming in with a bit more form than I ever really have. I’m hopeful for the week ahead. “

Lowry has shown signs of improved form of late - tied-13th at the BMW PGA in Wentworth, where he contended into the weekend, and tied-11th in the Houston Open last week - and admitted: “I’ve never really come in with much form and I feel like I’m playing okay coming into this week. I’m hoping my luck is going to change a little bit. All I can do is try and prepare the best I can, go out there Thursday and just be aggressive and just be smart, be aggressive when you need to be and stuff like that.”

Lowry has also identified an improved play of the Par 5s as vital to launch any challenge in the tournament which was postponed from its traditional April date to a novel November time slot due to the impact of the Covid-19 pandemic. “I need to have my eye a little bit on (the Par 5s) this week,” he admitted.

Although some players have used the lack of crowds as a disincentive, Lowry has adopted a more philosophical attitude. “I’m there to do my job and I know that . . . look, everybody thinks 2020 is a year that everybody is going to be happy to see the back of, but it’s going to be a very special year for someone come the end of this week. Hopefully that’s me . . . like, to be the first Irishman to ever wear the green jacket would be pretty special.”