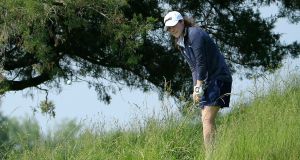 Ireland’s Leona Maguire hits her second shot on the seventh hole during the second round of the ShopRite LPGA Classic Presented on the Bay Course at Stockton Seaview Hotel and Golf Club in Galloway, New Jersey. Photograph: Michael Cohen/Getty Images

Leona Maguire kept within striking distance of the clubhouse lead after the second round of her professional debut at the ShopRite LPGA Classic in New Jersey.

The 23-year-old Cavan golfer carded a four-under 67 to add to her opening 69 to move to six under in the three-round event.

Maguire included an eagle-three on the par-five ninth hole on the Bay Course at Stockton Seaview Hotel and Golf Club and closed with back-to back birdies to finish her round on a high.

It left her in a tie for sixth position after the early starters had completed their rounds, four shots behind France’s Celine Herbin, who made it to 10 under after a second straight 66.

Leona’s twin sister Lisa struggled on her professional debut, carding a 13-over 84. She was among the afternoon starters and opened her round with a double bogey.