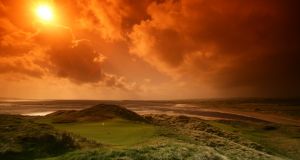 Lahinch Golf Club has suffered a loss of €1.3 million due to the collapse of theie overseas business because of coronavirus. Photograph: Getty Images

As much as Lahinch Golf Club – with its Atlantic-hugging Old Course and the Castle links across the road – provides a picture postcard setting that epitomises those seaside courses on the bucket lists of American golf tourists, so too does it serve as a vivid snapshot of the financial hurt felt by those iconic links up and down the western seaboard due to the coronavirus pandemic.

With the United States golf market to Ireland effectively disappearing for the year, members of Lahinch will, at their virtual annual general meeting on Thursday evening, hear the scale of the financial impact: a projected deficit of €2.7 million in green fee and associated revenue, resulting in a loss of €1.3 million for the year.

Golf is a numbers game for players, amateurs and professionals, with scorecards in their hands. But there is another side too, with inward golf tourism – pre-Covid 19 – estimated at contributing in excess of €270 million to the Irish economy with some 200,000 overseas visitors putting golf as the main reason for their trip.

All that, of course, changed through 2020 with the impact of the pandemic and the financial hit outlined by Lahinch provides a graphic picture of how golf clubs, businesses in their own right, were impacted. Although the club was one of those to pivot towards the domestic market, which brought in close to €200,000 in green fee revenue, that window was a short one, while there was of course the fact that the implementation of the Level 5 restrictions forced all courses in the Republic to close their doors again.

“At the start of it, none of us knew how bad it was going to be or how long it was going to go on for,” said Martin O’Sullivan, the chairman of Lahinch Golf Club. “Back in April, we did adjust our budget, we re-budgeted and looked at areas we could cut costs and did a revised budget and then revised it again a few months ago to project the results up to the end of December.

“The key number for us, is [we’re] down €2.7 million in what we call visitor revenue, the bulk of which is green fees and revenue from the shop associated with the visitors. Most businesses could not afford to take that sort of a belt. We’re lucky we had some reserves and pruned back our costs but we’re still coming in with a substantial financial loss. We’ve survived it for now but will look for things to improve going forward. This is a big enough hit.”

What Lahinch and other clubs who rely heavily on inward golf tourism as a significant part of business revenue will hope is that those tourists who postponed visits this year will make the trip at some point in 2021.

“Ninety percent of them have rescheduled [for 2021] and already there’s some talk from a small number of moving it on, those with the more pessimistic outlook, it might be the following year. But who knows? This is an evolving situation. We’ve budgeted for a worst-case scenario, but we’re mildly optimistic the second part of the year might see some travel if the whole vaccination programme works and there is a view the golfer might travel before the person on the coach tour,” said O’Sullivan.

For now, there is no plan to put a levy on membership. “Hopefully it will come back right. We had a bit of a cash reserve which helped, and we would hope to rebuild cash to cater for any similar things that happen in the future. In a club like ours, all the time we’re trying to invest back, any profits will be reinvested,” said O’Sullivan, a point in case being the €1 million spent on the coastal erosion project on the Atlantic coastline of the famed Alister Mackenzie-designed course ahead of staging last year’s Irish Open.