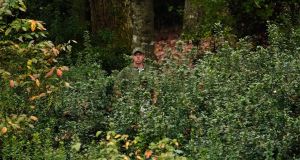 Rory McIlroy looks for his ball in the bushes during the first round of the Masters at Augusta. 'As an only child and an only child that played golf, I felt the world revolved around me. And now, it doesn’t.' Photograph: David J Phillip/AP

“When I was three I thought the world revolved around me: I was wrong,” yawped Bono aeons ago, when U2 were still on their punkish upswing.

The Vox-man’s old lyrics chimed curiously with the observation made by Rory McIlroy this week when he sat down to consider his latest tilt at the Masters tournament and his first Major golf tournament as a father.

In what has been a humbling year for humankind, there is something fabulously lonely about the sentence and, of course, it instantly takes several generations of Irish people back to the hazy footage of the cherubic young McIlroy, aged about nine, blithely chipping golf balls into a washing machine on the Gerry Kelly television show: a touch of light, uncomplicated feel-good entertainment as the North moved towards better times.

And it feels as if McIlroy has done his growing up in public ever since. He was fortunate that his years as a prodigiously gifted teenager, which he spent ripping through tournaments across the country, were covered largely in the old-fashioned way of print reportage; the instantaneous omnipotence of social media was still in the future.

Now he is 31-years-old and has won four Major tournaments. The basic intrigue around McIlroy revolves around the quest (and he’s never said it’s his quest) to win the Masters and thereby join the select company of Hogan, Player, Jones, Nicklaus, Sarazen and Woods by completing a career Grand Slam.

It is obvious by now that despite his range and repertoire from both tee and green, McIlroy won’t ever acquire the same icy remoteness and temperament to become a serial winner of Majors in the way that Woods has become. The bigger question is whether is best days lie ahead or behind him.

On Tuesday, McIlroy sat down at Augusta for a pre-tournament media outing in which he fielded questions on everything ranging from the pace of the greens to fatherhood. McIlroy is one of those sports figures who generate strong opinions. For many people he is about as approachable and modest as any sports star could possibly be. But I know many people, even those who do the golf, can’t get past what they see as too much Nordie nouveau swank, as if he has been inhabited by the ghost of Eddie Irvine circa 1999.

The only dealing I ever had with McIlroy was over the course of a weird day on an obscure golf club outside Munich where an interview had been arranged. McIlroy had stopped off on his way to somewhere Middle Eastern for a tournament to fulfil his contractual obligations with a certain German car manufacturer with whom he had an association.

The interview was fine but what struck me was just how much time he had for everyone in the golf club that day, how he went the extra mile to make people feel comfortable. It said a lot about how he was raised.

And the way he was raised was on McIlroy’s own mind during the week when he spoke about how the sudden chaos of parenthood took his mind to places, including what it must have been like for his parents 30 years ago. And he spoke about playing Augusta early in the week with his father and two other friends and how even the thought of walking up the 18th with his father, decades after the pair of them had begun to finesse his game on the local course, gave him “goosebumps” even now.

Goosebumps are the point of Augusta and the Masters tournament. It’s why the phantasmagorical vision of horticulture and elitism was dreamed up in the parched American 1930s. The course – the place – has always been the star of every tournament. It’s a fabrication in some ways – yes, they paint the grass, they put dye in the ponds, the birdsong is piped – to add a bit of David O Selznick Technicolour to the dream.

And it borders on David Lynch country, with the old, old champions moving around the course and the dinner menus and the jacket ceremony. But in a world changing at lightning pace, the Masters tournament represents a fixed point of unchanging reliability which people around the world find reassuring. Only the golfers’ names on the leaderboard change.

On Thursday, golf fanatics and dilettantes alike tuned in to see how “the Irish” got on over the first day of play. In November, Augusta has neither the honeyed Georgian light of spring nor the spectacular foliage and in this grim year, the subdued, empty background feels appropriate. What did look the same as ever was Tiger Woods’ expression of grave, indifferent focus as he bossed the course on the first day.

McIlroy came into the tournament as the puzzle; clearly carrying nuclear levels of potential but seemingly as mystified as everyone else as to what he might do with that.

On Friday, he did everything all at once, literally lost in the wilderness as he closed out a calamitous delayed first round and then immediately threatening to go supernova as he began the second round just to make the cut along with guys who shouldn’t belong in his realm; they hold a broom stick, McIlroy a light sabre.

It sometimes feels that after watching Woods’s jaw-dropping fall from grace and public collapse seven years ago, McIlroy decided that he was never going to allow the game to possess him in that way. You read or watch McIlroy talking in depth and what he emphasises more than anything is his desire to have a balanced, normal life.

Of course, McIlroy’s legion of fans don’t really care about how much time he is devoting to yoga or experimenting on the Vitamix. They want to see him rip it up on the golf course and, in particular, the most fabled golf course and to complete the Arthurian quest to travel from Box nightclub habitué to the Butler Cabin at Augusta.

The big unknown is whether McIlroy has the required fire and anger within to push him into the mental state he needs to secure the elusive title. He’s 31. There are plenty of chances left. But as he calmly reminded his audience this week, there are no guarantees, either. He’s moved into a different stage of life and even though McIlroy’s world did indeed revolve around him, he’s still figuring out his place in it.

1 Former France and Stade Francais winger Dominici has died aged 48
2 Gerry Thornley: Ireland don’t want to box themselves into a corner
3 No further players to be called up to Ireland squad to face Georgia
4 Owen Doyle: Ireland suffered from officiating of the breakdown
5 Kevin McStay: Maybe a knockout All-Ireland Championship is the long-term solution?
Real news has value SUBSCRIBE

Irish racing hopes ‘game-changer’ vaccines will accelerate return of spectators 17:00
Former France and Stade Francais winger Dominici has died aged 48 16:41
No further players to be called up to Ireland squad to face Georgia 15:14
Jack Grealish admits to careless driving after lockdown crash 13:22
Eddie Brennan steps down as Laois hurling manager 13:14
Here is your handy guide to sport on television this week