James Sugrue, Cormac Sharvin and Jonathan Caldwell all have work to do to make cut 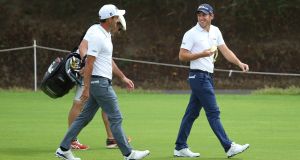 Edoardo Molinari and Lorenzo Gagli of Italy talk to each other as they walk off the first tee during day one of the Oman Open at Al Mouj Golf Complex in Muscat, Oman. Photo: Warren Little/Getty Images

Lorenzo Gagli and Edoardo Molinari made impressive starts to the Oman Open despite only being given the all clear to compete at the last minute following a coronavirus scare.

Both players had withdrawn from the European Tour event in Muscat on medical grounds on Wednesday. Gagli was tested for the virus after exhibiting flu-like symptoms and room-mate Molinari was moved to another hotel room.

When Gagli’s test came back negative the Italian pair, who had been replaced by Joel Sjoholm and Louis De Jager, were added to the field and sent out together at 1330 local time.

Gagli completed 17 holes in three under par and Molinari was two under when play was suspended due to darkness with another three players yet to complete their opening rounds.

In a statement on Twitter, Molinari wrote: “Still shocked by what happened in the last 36 hours. I am absolutely fine and so is my good friend Lorenzo.

“It was a scary and annoying situation because it is not something that was in our hands and there were no certainties at all.

“The European Tour, the Oman Ministry of Health, the Oman Golf Federation and all their staff did an unbelievable job and they tried everything they could to help us in this awful situation...Thank you all!

“Thank God everything is fine, we are healthy and we are back to playing golf, which even this morning seemed impossible!

“I will not release any other comments on the issue and I am sure you will all respect my privacy. Thanks for everyone who reached out to me, I truly appreciate that.”

Italy’s Guido Migliozzi holds the clubhouse lead on six under par following a bogey-free 66, with Brandon Stone, Rasmus Hojgaard and Taehee Lee on five under.

The Irish trio in the field all have work to do after their opening rounds with amateur James Sugrue the best of the lot at one over par.

Sugrue – who won the Amateur Championship last year and will play in the US Masters next month and the US Open in June before turning pro – had a birdie and a bogey in his first three holes before a run of pars. Three bogeys on the back nine did the damage but he managed to finish with a birdie three to take into the second round.

Two birdies on Cormac Sharvin’s back nine saw him battle to a round of 75 while the damage was done on the front nine for Jonathan Caldwell who made five bogeys and a double to turn at seven over before a further two bogeys and two birdies on the way in saw him sign for a 79.

Migliozzi, who won twice last season, said: “It’s a very good start to the tournament, a 66 and a bogey-free round.

“This is a tricky course because the greens are tough and tight, and there are a lot of things which need your attention like the wind and the release of the ball.

“You can play each hole in a few different styles but it’s really cool and all the players are really happy to play here.”

Playing partner Stone, whose sole top-10 finish last season did not come until the end of October, carded five birdies in a bogey-free 67.

“Last year was a fantastic year for me, even though the results weren’t really there, because we put a lot of structure in place, physically and mentally, and we did it to transform me as a person as well as a golfer,” the South African said.

“My game feels fantastic and I’m feeling physically the best I ever have.

“Rounds like today make me sit back and think ‘That’s it, that’s what we’re after’ and after a bogey-free 67 on a tricky golf course that can bite you, I’m a very happy man.”

Completed first scores (Suspended due to darkness, re-start tomorrow 07:55am)