Irish Open: How to get there, how to get tickets, where to stay 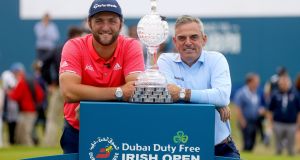 The Irish Open returns to a parkland course this year after a three-year run on links tracks both sides of the border. The Jack Nicklaus-designed Mount Juliet in Kilkenny will play host to the Rolex Series event which was won last year by Jon Rahm at Lahinch. It’s the first time Mount Juliet has hosted a professional event since the World Golf Championship American Express was won by Todd Hamilton in 2004, while two years previous to that Tiger Woods won the same title at the same venue.

After switching back from a July date to the June bank holiday weekend this year, the four-day event falls right in the middle of Major season – just two weeks after the US PGA and three weeks before the US Open. With Rory McIlroy set to head the field this year as well as British Open champion Shane Lowry and a host of other names from the world’s best, it looks set to be an exciting weekend.

Mount Juliet sits 20 minutes south of Kilkenny city in Thomastown. Kilkenny is fairly easily reached from any part of the country if you’re driving while the best option when it comes to public transport is the train.

The city is on the Dublin to Waterford line and a return journey from Dublin Heuston starts at as little as €26 on the Irish Rail website. However, do note that you cannot book these tickets until 90 days before the day of travel.

Park-and-ride passes are currently on sale via eventbrite.ie for €5 for an individual day or €10 for a season pass covering all four days.

Now is the best time to buy tickets for the event as the early bird window is operating meaning you can save a few quid. Tickets are available on eventbrite.ie with an adult season ticket pass (covering the pro-am on Wednesday and all four tournament days) priced at €83, while student and over 65s season tickets are €60 and juniors are €25.

If you fancy going for just one day, an adult ticket to the pro-am will cost €13, on Thursday and Friday it will be €23 and at the weekend it will be €27.

A weekend in Kilkenny is never short of entertainment even at the quietest if times so a summer Bank Holiday coupled with the Irish Open is well worth staying over for.

Unfortunately, the combination of both of those things means accommodation prices are not cheap. A double room for the Thursday night of the tournament – the cheapest night during the event – will cost you more than €260 at the likes of the Kilkenny River Court Hotel or the Kilkenny Ormonde Hotel in the city centre, although there are options for less than €100 if you’re happy enough with a hostel.

On the Saturday night most places are already booked out on the likes of Booking.com and Trivago. There are some options outside the city and it’s always worth checking the websites of the hotels themselves, but be warned that it won’t be cheap.

This article is part of a series of consumer-based sports stories. If you have any queries, stories or issues regarding travel, tickets, sport on television or anything else you can email rcroke@irishtimes.com or via Twitter @Ruaidhri_Croke.