Rory McIlroy heads for Mexico with ‘WGC slam’ in sight 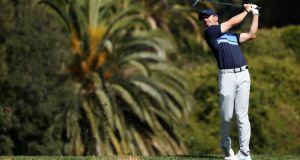 Rory McIlroy plays a shot on the fifth hole during the final round of the Genesis Invitational in Pacific Palisades, California. Photo: Chris Trotman/Getty Images

The amount of greenbacks up for grabs doesn’t always lure the big names. No fewer than three of the world’s top-10 ranked players – Brooks Koepka, Tiger Woods and Patrick Cantlay – have chosen not to include the €9.7 million WGC-Mexico Championship in their schedules, where Rory McIlroy will again carry the mantle of world number one into the tournament.

In fact, the list of those staying away extends still further, with Justin Rose, Rickie Fowler, Tony Finau and Henrik Stenson also absent, as players seek to map out their schedules running up to the US Masters in April.

For McIlroy – runner-up to Dustin Johnson a year ago – the return to Chapultepec, a course 7,500 feet above sea level, comes with the chance to join Johnson as the only players to complete the “WGC Slam” of winning all four of the World Golf Championships (WGCs). McIlroy will also been seeking to claim back-to-back WGCs, having won the WHC-HSBC Champions tournament in Shanghai last November.

McIlroy’s bid to claim the Genesis Invitational was undone early on in his final round, where the 30-year-old Northern Irishman ran up a triple-bogey seven on the fifth hole and compounded matters with a bogey on the sixth. He eventually finished with a final round 73 for 276, three strokes off winner Adam Scott.

In attesting to suffering “one little sort of lapse” in running up that triple after missing the green with his approach, explained his travails on the fifth hole: “I just got a flyer out of the rough,” said McIlroy of his nine-iron approach which got him into trouble in greenside rough. “Obviously not the place you want to leave yourself . . . (and on the third shot) I caught it a little thin, so it came out lower than I wanted to.

“There was actually a little depression, sort off a hump and a little depression and then the hill up to the green. I was trying to land it into this little depression and I got a groove low and it kind of hit the first hill and then really stopped it. It if had carried that, it probably could have trundled its way up onto the green because I had played those (bump) shots well.” On eventually reaching the green, McIlroy’s fate was effectively sealed with a three-putt for a seven. “Apart from that, I played pretty well.”

McIlroy’s tied-fifth finish at Riviera nevertheless extended his run of consistency: since missing the cut at the British Open last July, McIlroy has played 12 events and has racked up 10 top-10s, eight top-5s and two wins in that period which has elevated him back to number one in the world rankings.

Graeme McDowell, winner of the Saudi International on the European Tour earlier this month, resumes action having bypassed the Genesis, while Shane Lowry, who hasn’t played since that tournament in Saudi Arabia, moves his attentions back across the Atlantic for an extended run of events.

McDowell’s upward trajectory in the world rankings – 47th in the updated list – has brought with it a return to the WGCs. The 40-year-old hasn’t played in one of the WGCs since 2016, when he competed in the Dell Technologies Match Play.

The secondary event on the PGA Tour this week is the Puerto Rico Open at Coco Beach resort, where Séamus Power will be in action.

The Waterford man has a reduced playing category on the PGA Tour this season but has worked with his coach Justin Parsons to improve his swing to get rid of a recurring miss that had crept into his game. Power finished tied-38th in the recent Pebble Beach pro-am and will have targeted Puerto Rico as an opportunity to claim precious FedEx Cup points. Power is currently 197th on the standings, sandwiched between Jason Dufner and Martin Trainor who, as it happens, is the defending champion in Puerto Rico.

With the LPGA Tour going into an enforced break due to the cancelation of three tournaments scheduled for Asia, Leona Maguire this week switches over from the LPGA Tour and utilises her Ladies European Tour (LET)card to play in the Australian Classic in Bonville, which is the opening event on the new LET season.

1 ‘Magnificent’ Conor Connelly remembered after sudden death
2 Favourite sporting moment? It’s a bit like choosing your favourite child . . .
3 Karen Robinson Walton: I am looking at him. I say ‘Benjamin, what have we done?’
4 My favourite sporting moment: When Zidane glided through Brazil in 2006
5 Angling Notes: Many fisheries have closed for the foreseeable future
Real news has value SUBSCRIBE