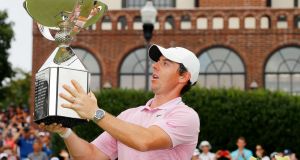 The vagaries of the world rankings aren’t lost on Rory McIlroy, who returned to top of the pile again without the need to swing a club. The weighted system is such that weeks off can sometimes be as important as those weeks with clubs in hand; and the Northern Irishman’s return to world number one - for the first time since September 2015 - is just reward for his consistency over the past year: four wins among 20 top-20 finishes.

In what is McIlroy’s 96th week of his career as the world number one, that status will be put immediately to the test at this week’s Genesis Invitational at the famed Riviera Country Club in Los Angeles where the top five of the world rankings and nine of the top-10 are in the field for a tournament hosted by Tiger Woods.

Yet, McIlroy’s route back to the top of the world has been based on that level of consistency, although both Brooks Koepka and Jon Rahm each have the chance to usurp him - depending on results at Riviera - this week. What McIlroy knows, though, is that he also has it in his own hands to make his stay a longer one.

“It’s a byproduct of playing consistently good golf and I’ve been doing that for a while now,” said McIlroy of his trajectory back to the world number one position, who explained moving back to that top spot only became a goal again after winning the Tour Championship at the end of last season which also clinched him the FedEx Cup pot of gold: “There was a point in the middle of last year where I was four ranking points behind Brooks, which is a big gap. . . once I’d won the Tour Championship and then won again in China, I kind of saw that gap closing. Then it sort of became, ‘Huh, I’m actually close’.”

As recently as last month ahead of the Farmers Insurance Open, McIlroy had acknowledged the rankings system as “a very imperfect” one but observed at the time, “to be number one at whatever you do is a pretty cool feeling.”

McIlroy had an opportunity to assume the top spot with a win in the Farmers Insurance Open on what was his first appearance of the year, where he finished tied-third. McIlroy resumes tournament play at this week’s Genesis Invitational which, for the first time, assumes that invitational category which means a limited field (reduced from 140 to 121) and which rewards the winner with a three-year tour exemption.

With the Masters as ever providing a focus in setting out his scheduling, McIlroy plans to play back-to-back weeks at Riviera followed by the WGC-Mexico Championship and again next month where he has penciled in the Arnold Palmer Invitational at Bay Hill followed the next week by his defence of The Players Championship at Sawgrass. His schedule after that is to make the Masters the end of a three week stint, starting with the WGC-Dell Technologies Matchplay, the Valero Texas Open and then Augusta.

McIlroy is the only Irish player competing in the Genesis Invitational - with Shane Lowry and Graeme McDowe’l set to resume tournament play at next week’s WGC-Mexico Championship - but the tournament in Riviera has drawn the strongest field so far this year, with Woods as host and only Webb Simpson from the world’s top-10 an absentee.

For a number of players, the Genesis Invitational offers the last chance to break into the world’s top-50 in order to qualify for next week’s WGC event in Mexico. Among those looking to jump into that final qualifying are Collin Morikawa (currently 53rd in the world rankings) and Phil Mickelson (55th). Jordan Spieth’s par save chip-in on the 72nd hole of the Pebble Beach Pro-Am gave the former world number a top-10 finish, and moved him up six places to 49th in the world to earn his ticket to Mexico.

Total weeks at number one: