Out of Bounds: how Ireland could have three golfers in Tokyo 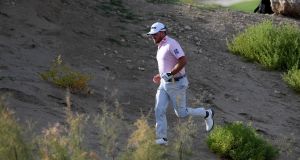 One potential off-shoot of Graeme McDowell’s upward trending in the world rankings is for a third male qualifier for the Ireland team at the Olympics in Tokyo.

Such a possibility was so far off the radar at the start of this year, with Rory McIlroy and Shane Lowry home and hosed in terms of nabbing down two spots for the Olympic Games . . . however, G-Mac has moved onto the imaging screen in a rather dramatic way; and the speed of his arrival should make for an interesting few months ahead before the team is finalised following the 149th British Open at Sandwich in July.

Since the turn of the year, McDowell’s accumulation of world rankings points - which double up as Olympic qualifying points - has been nothing short of remarkable, to the extent that only Americans Justin Thomas and Webb Simpson have garnered more of them. McDowell has added 62.08 points so far this year, in a hot start that so far has featured a top-five at the Sony Open and a win in the Saudi International.

The dynamics of Olympic qualifying is straightforward, in that the field for both the men’s and the women’s strokeplay tournaments are each limited to 60 players based on world ranking points gained since July 2018. The final cut-off date to determine qualifying falls on 22nd June 2020 for the men, a week later on 29th June 2020 for the women. Leona Maguire and Stephanie Meadow are guaranteed to make it.

Up to recent times, McIlroy (who will return to world number one next week) and Lowry (ranked 17th in the world) were effectively assured of making it a two-man assault. McDowell’s form has changed that dynamic. Up to 47th in the world rankings following his win in Saudi Arabia, McDowell’s arrival on the Olympic qualifying lists opens up the possibility of challenging Lowry for that second spot or, even more intriguingly, opening up the potential for a third Irishman to make it to Kasumigaseki Country Club for the 72-holes strokeplay tournament on July 30th-August 2nd.

One of the qualifying specifications for qualifying for the Olympics is that a country is entitled to more than two players (up to a maximum of four) if they are inside the world’s top-15 when the process finishes after the Open in Sandwich.

The International Golf Federation’s guidance on the matter states, “the top-15 world-ranked players will be eligible for the Olympics, with a limit of four players from a given country.”

For Ireland to get three players there, it will take Lowry and McDowell to move upwards into that top-15 to join McIlroy. It is not beyond the bounds of possibility any more. Lowry is within touching distance of that objective; McDowell’s form is such that he has made huge strides in a matter of months to get himself into the frame.