McDowell gives home fans something to shout about 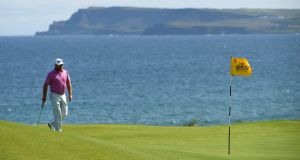 Graeme McDowell of Northern Ireland walks onto the fifth green during the third round of the 148th British Open at Royal Portrush. Photo: Stuart Franklin/Getty Images

The people of Portrush were in situ in plenty of time to greet Graeme McDowell as he strode onto the first tee. A portable gallery initially thronged the grandstand around the first tee but then scampered to accompany G-Mac on his journey around the Dunluce Links.

While not quite a dew-sweeper, he was in the third match out on the course alongside Bubba Watson and he repaid the support with a fine 68 that took him to two under for the British Open with one round remaining, jumping into the top-35 when he finished.

Six adrift of the joint 54-hole leaders Shane Lowry and JB Holmes, Sunday’s weather, with heavy rain and high winds forecast, suggest that McDowell’s interest is not quite academic if he gets an early tee time that is slated to miss the worst of the elements.

His front nine was largely trouble free, one birdie, one bogey but crucially the former US Open champion had created several opportunities but only managed to avail of one. The difference on the back nine was that his conversion rate improved appreciably, bookended by birdies at the 11th and 12th and the 17th and 18th with just a single concession to par at the difficult, 14th.

“It was a fun morning, 10 deep down the first fairway. With Rory and Darren no longer here, people focused on me and it was fun to have that Saturday looseness and be able to enjoy it really. Nine back, Saturday morning relaxed and enjoying it,” said McDowell.

“I thought the pin positions in general were quite difficult, in the crosswinds some hard left-right and right-left out there. You have to control your flight out there . . . I’m sure Shane will be watching the coverage and learning as much as he can, see how some of these holes are playing. It’s been a long wait, but he is a pretty chilled guy. There’s lots of good players on the course and we will see how the lads cope,” added McDowell.

Of McIlroy’s exit, he said: “Anyone who watched Rory finish yesterday, it was exciting. he was wearing his heart on his sleeve . . . it means a huge amount to us all, that raw emotion shows how much it means to him and to us all. Sometimes guys look like robots but we’re not, we hurt.”