‘I think that’s probably the biggest thing, the last three or four years, was just realising that you’re not invincible’ 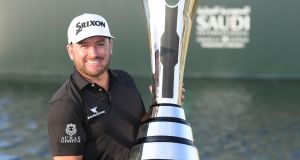 Graeme McDowell believes he will have a greater appreciation for the trappings of success after experiencing “life on the outside”.

McDowell’s victory in the Saudi International lifted him from 104th in the world rankings to 47th, less than a year after the 2010 US Open champion found himself a lowly 257th.

That gives the 40-year-old Northern Irishman entry into the lucrative World Golf Championship events, along with a first Masters appearance since 2016 if he remains in the top 50 at the end of March.

“I think I was in the top 50 in the world for, I don’t know, five, six years,” McDowell said in a pre-tournament press conference ahead of the AT&T Pebble Beach Pro-Am, where he won the US Open in 2010.

“And when you’re on the outside looking in, when you’re not in those WGCs and the Majors, they nearly have a self-perpetuating world-ranking cycle and the top 50 feels an awfully long way away.

“At 47 you could be one week away from falling back outside of that, so obviously establishing myself into the top 30, top 20, that’s what I really want.

“But I think this will pretty much get me in Mexico in a couple of weeks’ time, pretty much guaranteed World Match Play, which is really important to me, and I think Memphis as well.

“So just to be back in those, I think I’ll appreciate them a lot more this time around. I think all those years where it’s expected, maybe you don’t appreciate what it is and what they are and how important they are at the time.

“I always felt like if I ever got the opportunity again I was really going to appreciate it and never take it for granted and prepare well and make sure I continue to work hard, because you just don’t know when this is going to go away.

“I think that’s probably the biggest thing, the last three or four years, was just realising that you’re not invincible and that this sport is very fickle and it will go away some day.

“I think I tasted that little bit of mortality, probably this time last year, and I realised that if I ever got the chance again that I was going to work hard and do the best that I possibly could with that opportunity.”

McDowell will enjoy plenty of happy memories on the 10th anniversary of his US Open triumph at Pebble Beach, where Phil Mickelson defends his title fresh from finishing third behind McDowell in Saudi Arabia.

“Lots of great memories that week, of course, but [the best is] probably coming up the last and just having two putts from 25 feet to win a US Open,” McDowell added.

“You visualise that as a kid standing on the putting green and then all of a sudden you’re like, ‘Well, yeah, I’ve got two to win a Major championship here’.”