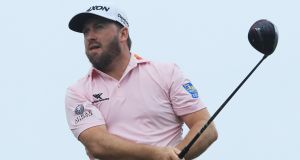 Graeme McDowell carded a six-under 64 to take a share of the lead in the Saudi International. Photograph: Sam Greenwood/Getty Images

Graeme McDowell drew inspiration from a typically entertaining performance from playing partner Phil Mickelson to claim a share of the lead in the Saudi International.

McDowell birdied four holes in a row from the second and recovered from a double-bogey on the 11th with four more to card a six-under-par 64 and join Malaysia’s Gavin Green at the top of the leaderboard.

Henrik Stenson, Sebastian Soderberg, Adri Arnaus, Victor Perez and Jhonattan Vegas are a shot off the lead after rounds of 65, with Mickelson part of a six-strong group a shot further back after an adventurous 66.

McDowell told Sky Sports: “It feels good. I got off to a fast start which was huge before the wind got up. You know it’s going to blow in the afternoons and it was nice to get out of there with six under par because I felt like I played great today.

“It would have been a horrible round to let get away but to finish birdie, birdie, birdie was nice – just feeding off Phil there who had seven birdies on the back nine.

“It was ‘Phil the Thrill’ there, it was fun to watch and fun to play with him.”

Mickelson, who has slipped to 86th in the world rankings, was two over par at the turn but carded seven birdies and a bogey in a back nine of 29. The five-time Major winner made just one par from the eighth hole onwards and five in total.

“It was a rough first nine in that I get a little anxious because I know that I’m playing well and then I start to not really focus and see and visualise the shot that I want and some negative thoughts creep in,” Mickelson said.

“I did a much better job throughout the round of regaining control and started to see what I wanted the ball to do rather than what I didn’t and in the back nine it really started to come together.

“The patience paid off, of fighting to stay in there, and then all of a sudden it started to click and I made a bunch of birdies.”

Mickelson will be eligible for the Champions Tour when he turns 50 in June, but appears intent on competing on the European Tour and PGA Tour for as long as possible.

“The older I get the more I appreciate what I get to do for a living,” the left-hander added. “I love the challenge to continue to try to play golf at the highest level because I believe it’s possible.

“I believe if you take care of yourself, work out properly, you eat well, physically recover and do the right things at night I think you can continue to play at a very high level and that’s a fun challenge for me to try to attain.”

World number one Brooks Koepka birdied the par-five 18th to card a level-par 72, while British Open champion Shane Lowry made six on the same hole after his approach came to rest in rocks on the edge of a water hazard.

Lowry played the ball from the rocks but saw it roll back into the water and did well to salvage a bogey which left him five shots off the pace on one under.

LEADERBOARD
Britain and Ireland unless stated, par 70, (a) denotes amateur