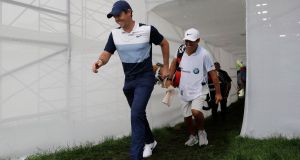 Rory McIlroy has questioned both the radical new format and the focus on the $15million (€13.5million) first prize at this week’s season-ending Tour Championship.

From 2019, the player who has the most FedEx Cup points after the BMW Championship starts the first round of the Tour Championship in Atlanta on a score of 10 under par, in this case Justin Thomas.

The second-highest points earner will begin at eight under, the third-ranked player at seven under and so on, on a sliding scale down to the players in 26th to 30th who start on level par.

McIlroy starts on five under par and could, therefore, beat Thomas by four shots over 72 holes and still finish behind the former world number one.

“We had breakfast with some of the sponsors and what I said to them was if the PGA Tour are trying to do this season of championships, where it starts with the Players in March, then goes through the four majors and culminates with the FedEx Cup at the end, if the FedEx Cup really wants to have this legacy in the game like some of these other championships do, is people starting the tournament on different numbers the best way to do it?” McIlroy said.

“I get it from a fan experience point of view, I get it from giving guys that have played better throughout the year an advantage, but I don’t know... come back to me on Monday and I’ll tell you if it has worked or not.

“You can shoot the best score of the week and not win the golf tournament. If that happens to someone it’s going to be hard for them to wrap their head around.”

Speaking about the $15m first prize, up from $10m last year, McIlroy added: “Who knows what the winner wins at the Masters? I don’t know because that’s not what it’s about.

“So again, if the FedEx Cup wants to create a legacy that lasts longer it doesn’t need to be about the money, it should be about the prestige of winning an event that you’ll be remembered for.

“The money’s great but I’ll get more satisfaction than from winning the golf tournament and playing well. I don’t think the money needs to be front and centre because I don’t think that’s what the fans care about.

“It’s definitely a thought that came into my head, how can we make ourselves more relatable to the fans and having $15m front and centre isn’t probably the best way to do it.

“But at the same time, if you turn on Sports Center, you turn on any other shows, you’re looking at football players and baseball players, basketball players getting $150m over four years. So it’s front and centre over there and it’s guaranteed. This isn’t guaranteed for us, you’ve got to play to earn it.”

When the changes to the format were announced last year, defending champion Thomas was asked if the lack of a level playing field for the Tour Championship went “against the grain of what makes sport special”.

“I really don’t know what to say. I agree with you, I’ll just say that,” Thomas said at the time and, 11 months on, he finds himself the beneficiary of the changes thanks to his victory in the BMW PGA Championship.

“There isn’t a person on the planet that has experienced this before, for the stakes that it’s for, and I’m just going to try to deal with it the best that I can,” said Thomas, who starts with a two-shot lead over Patrick Cantlay, with Brooks Koepka another stroke back.

“It’s the first year of it and obviously we changed it because we thought it was for the better. Like anything you don’t really know for a couple of years until you see what happens.

“With this format it has the potential where myself and a couple of guys get hot at the top of the leaderboard and it could be a one-man show, but if some of us at the top don’t play well and some of the guys at the bottom play well, you legitimately have the chance of 25-28 guys that have a chance to win $15m on Sunday.

“I’m really going to try not to pay attention to the leaderboards because it could be easy to get wrapped up in it early when I know this course sets up well for my game.

“I’ve played well here the three years that I’ve played and I’ve been playing well so if I can just continue to do what I’ve been doing then I should be okay.”

How each player starts at the Tour Championship

Amber Barrett hoping hard work will pay off with Ireland 06:44
West Ham ‘really disappointed’ after win over Leeds, says Moyes 06:28
Jamison Gibson-Park embracing life as the main man 06:53
Games remain on hold as the GAA wait for word from the Government 06:49
Jack Byrne embracing ‘technical football’ in Cypriot sunshine 07:16
Here is your handy guide to sport on television this week