Rory McIlroy hoping to ring in anniversary with WGC win 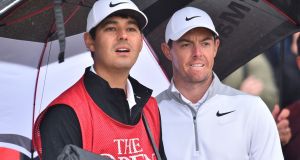 Rory McIlroy and caddie Harry Diamond shelter under an umbrella on the fifth tee during the second round of the Open Championship at Carnoustie. Photo: Glyn Kirk/Getty Images

This is a first-year anniversary of sorts for Rory McIlroy. It was this week a year ago at the WGC-Bridgestone Invitational that McIlroy first used Harry Diamond as his caddie, an arrangement of which – at the time – was akin to the old question of, “how long is a piece of string?”

McIlroy himself wasn’t sure if it would be a short-term, medium-term or long-term association with his friend. Indeed, at the pre-tournament press conference, he jokingly gave out an email address for potential bagmen.

“We’ll see how the next two weeks go, but I’m not ruling anything out. It could be two weeks; it could go longer than that,” remarked McIlroy, who had dispensed with the services of his long-time caddie of nine years, JP Fitzgerald. That split had come in the aftermath of a fourth-place finish in the British Open at Birkdale.

Twelve months on, the McIlroy-Diamond partnership has proven to be a durable one and, in what is the last WGC-Bridgestone Invitational at Firestone Country Club in Akron, with the tournament set to move to Memphis next year, it has remained strong.

This week’s WGC Bridgestone will mark McIlroy’s 25th tournament since Diamond took over caddying duties: over the past year, McIlroy has only won once (at the Arnold Palmer Invitational) but he has had no fewer than eight top-5s including four runner-up finishes, most recently at the British Open at Carnoustie.

McIlroy’s record around Firestone is impressive. In six appearances there, the Northern Irishman has had five top-10s. McIlroy’s victory came in 2014 – he was unable to defence in 2015 due to his ankle injury and then missed out in 2016 when it clashed with the French Open – but the only time he featured outside the top-10 was when he finished tied-27th in 2013. His record reads: 9th-6th-5th-1st-27th-5th.

The only other Irish player in the limited, no-cut field this week is Paul Dunne, who is exempt for his British Masters victory last season. Dunne underwent a medical procedure last week – following the Open at Carnoustie – to drain a cyst in his hand and heads into a two-week stint stateside that takes in a debut at Bridgestone followed by the US PGA at Bellerive.

Tiger Woods, an eight-time champion, secured his place in the field in moving back into the world’s top-50 – in 50th – following the British Open. Woods has a remarkable record around the course, with eight wins in 15 starts and a total of 12 top10 finishes.

Dustin Johnson’s win in the Canadian Open strengthened his position as number one in the world rankings, with only Justin Rose – with an win in Akron – capable of leapfrogging him in the rankings. The win was Johnson’s third of the season, along with the Tournament of Champions and the FedEx St Jude Classic.

Johnson rebounded from a missed cut in Carnoustie with a dominant three stroke winning margin over Korean’s Ben An and Wee Kim.

Of his performance at the British Open, Johnson observed: “I just wasn’t focused. I don’t know if I had trouble sleeping. I don’t know what it was. So I knew (coming into the Canadian Open) I was going to make sure I focused on every shot and really thought about what I was doing and where I wanted to hit the ball. I did a good job of that every shot for the whole tournament.”

There are three Irish players in the field for this week’s stop on the Challenge Tour. Neil O Briain, Gavin Moynihan and Cormac Sharvin are competing in the Swedish Challenge hosted by Robert Karlsson in Katrineholm.