Shane Lowry: Referee ‘didn’t have the balls’ for ruling on 16th 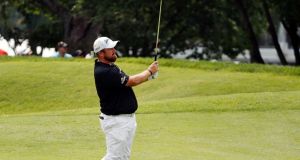 Shane Lowry bemoaned the decision of a rules official after the final round of the US PGA Championship at Bellerive. Photo: Brynn Anderson/AP Photo

Shane Lowry won’t have two rules officials on his Christmas card list after he was denied relief from a television tower on the 16th hole in his quest for a high finish in the US PGA Championship.

The 31-year-old Offalyman was on target for a top-five finish until a bogey on the 16th was followed by another on the 17th as he finished with a closing 70 for an eight-under-par total of 272, which gave him a season-best finish of tied-12th.

But he wasn’t a happy camper about an incident on the Par 3 16th where he was required to play from an impeded lie after two rules officials failed to make a call on his predicament and he decided after a lenghty delay to play from the original position from where he could only find heavy greenside rough.

“I think the referee didn’t have the balls to make a decision there and, if he did, I would have had an easier shot. If you put John Paramor or any of the good referees out there and he would have given me full relief. But he wasn’t giving me full relief, he was telling me to drop it in the tree basically. I ended up making a good four; if I’d made double I wouldn’t have been too happy with him. It is what it is. It took so long I felt I was getting in Justin’s way, he ended up making bogey as well.

“The camera tower was the issue. I took my drop there was another camera tower in my way, straight away I felt I should get dropped on other side and they were getting me to drop it in the middle of the tree. I can’t, so where do I drop it? They’re saying drop it here, I have a club length (to drop the ball) and it is still my way. He wouldn’t make a decision. The other referee said, ‘it is your decision’. I said, ‘Do you know what? I’m just going to play’. I didn’t want to wait around any longer. It happened. It is not the end of the world,” said Lowry.

Justin Thomas exonerated Lowry of any blame in the delay, which also cost him a bogey. “It had nothing to do with Shane. The rules officials were having a hard time coming up with a ruling. They were kind of looking at each other and saying, well, what do we do and Shane’s like, look, just tell me if I get a drop or not. And I’m a quick player and that’s why I went. I didn’t have the best of lies so I think the less I thought about it, the better. But, yeah, it was just one of those things, he wanted to make sure he got the right ruling because he was still in a position to finish really high in this tournament.”