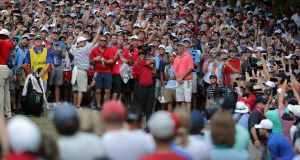 Tiger Woods plays a shot on the ninth hole during the final round of the 2018 PGA Championship at Bellerive Country Club in St Louis, Missouri. Photo: Richard Heathcote/Getty Images

United States captain Jim Furyk will select another vice-captain if, or more realistically when, he names a “priceless” Tiger Woods as one of his Ryder Cup wild cards.

Woods was expected to be given a wild card even before his thrilling performance in the US PGA Championship at Bellerive, where he finished second behind two-time US Open winner Brooks Koepka.

And although Furyk was not about to make it official during a press conference arranged to discuss the eight automatic qualifiers for his team, the 48-year-old conceded he would choose another vice-captain to allow Woods to concentrate on playing at Le Golf National in September.

“I want to make sure I have five vice-captains there,” Furyk said. “That’s what we’re allowed and I see a lot of value in having all five there. So I will have five.

“Tiger’s been a vice-captain in the team room as a player. He’s priceless, to be honest with you. He’s been really a big help to our captains in both 2016 [Ryder Cup] and 2017 [Presidents Cup] from a strategy perspective and also really serving on the golf course, walking with players.

“I think it’s been a big boost having the best player maybe to ever live following your group and being there for support.

“I rely on every vice-captain heavily. With Davis Love serving as a captain twice and [Steve] Stricker being our Presidents Cup captain last year, they intimately know these players and know them very well. So to have them there is great.

“But Tiger serves that purpose as a vice-captain or a player and I’m looking forward to having his help.”

Woods moved from 20th in the qualifying race to 11th thanks to his runners-up finish at Bellerive, but Furyk added: “I’m not sure the numbers are always that important when I look down the list. What is important is how well Tiger has played.

“Sixth place at the Open Championship, a second place at the PGA. His game is trending so it’s great to see him playing well. The numbers are nice, they’re good to look at, but not always the most important. We want the players who are going to help us be successful.”

Furyk is also expected to give Phil Mickelson a wild card after the five-time major winner failed to qualify automatically for the first time in his career, with the likes of Bryson DeChambeau, Tony Finau, Xander Schauffele, Matt Kuchar and Zach Johnson in the frame for the remaining two.

1 Six Nations: Ireland are contenders but England still the team to beat
2 Limerick roar from behind to sink Tipp and start league in style
3 GAA officials and referees brace themselves as new rules kick in, and this time it's for real
4 Mike Catt hopes to have Irish backs purring in Six Nations
5 Owen Doyle: Creeping professionalism of schools rugby a threat to the game
Real news has value SUBSCRIBE

Agony as Leitrim are denied victory at the death by Derry 19:31
Limerick roar from behind to sink Tipp and start league in style 19:20
Dominant England move closer to series win in South Africa 18:35
Odsonne Edouard’s double sees Celtic past Ross County 18:22
Valencia end Quique Setien’s Barcelona honeymoon 17:40
Here is your handy guide to sport on television this week