With players sorely tested by US PGA, Jim Furyk is left with big decisions as to who to bring to Paris

Brooks Koepka fought off an inspired challenge from Tiger Woods to win the PGA Championship on Sunday (August 12), giving the big-hitting American his second major title this season. Video: The Golf Channel 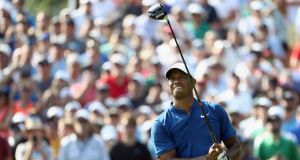 Tiger Woods plays his shot from the 17th tee during the third round of the 2018 PGA Championship at Bellerive Country Club in St Louis on Saturday. Photograph: Jamie Squire/Getty Images

A curious aside to the actual quest for the Wanamaker Trophy unfolded during the US PGA Championship. As the last counting tournament to earning an automatic place on the USA team, it involved the decision to group Tony Finau and Xander Schauffele alongside US Ryder Cup captain Jim Furyk for the first two rounds, almost like a dress rehearsal of the players’ ability to deal with pressure for the match itself.

Fair play? Or unfair? Furyk sent the duo a text message to let them know it wasn’t his doing, and repeated those words in person when he met them.

Nobody could have foreseen the wild rollercoaster ride that followed.

Both Schauffele and Finau survived the cut, but it was Finau’s second round – as unorthodox a round as you’d find anywhere – which provided that feeling to Furyk of a middle-aged man sent to a Six Flags extreme ride. One part fascinated by the experience, the other having that sickly feeling in the pit of the stomach. Too high a price to pay?

To recall, Finau’s 10 birdies in one round equalled a record in the Majors held by Gary Player. On the other eight holes, though, the towering American had a double-bogey, three bogeys and four pars. Perhaps one side of Furyk was excited by Finau’s birdie-making (thinking fourballs) but left with a dizziness about what he’d bring to his partner in foursomes.

Then again, Furyk had plenty of reason to feel just a little dizzy about how those knocking on the door for an automatic place faltered at the last step. Bryson DeChambeau (ninth in the standings) and Phil Mickelson (10th) missed the cut. So too did Matt Kuchar (12th) and Kyle Stanley (14th). Not exactly displaying stomach for the fight, you’d feel.

With the eight automatic qualifiers – Dustin Johnson, Brooks Koepka, Justin Thomas, Patrick Reed, Bubba Watson, Jordan Spieth, Rickie Fowler and Webb Simpson – securing a ticket to Paris by their own volition, the destiny of others lies in the hands of Furyk: he will select the first three of his four “wild card” picks following the Dell Technologies on September 3rd and add the final selection after the BMW Championship on September 9th.

I think you want a good mix of both veterans and rookies on your team for what they bring, what they provide

Those who stumbled so late in the qualifying process have conceivably opened the door for Tiger Woods – already selected as a vice-captain – to have a far more important task than fetching coffee. Indeed, it would now seem inconceivable for Furyk to overlook Woods’s right – given how late he entered the qualifying process, going from zero to knocking on the door – to a front-room place as a player.

“I think you want a good mix of both veterans and rookies on your team for what they bring, what they provide. I think the task we have and with the crowd, with what goes on at a Ryder Cup, I mean, it’s like basically a football game breaks out in the middle of a golf tournament. You definitely want to identify people that you think will really enjoy that type of atmosphere. It was very clear early on, I think to everyone, that Patrick Reed really enjoyed that atmosphere at Gleneagles. You want guys that have that fire and have that passion and that you believe will thrive in that type of atmosphere,” said Furyk of identifying potential captain’s picks.

Thing is, picking Woods – playing well again – is a no-brainer. Mickelson too, for experience, but probably more because it was his words against Tom Watson at Gleneagles that sparked how the USA started to mimic the Europeans in team-building and selection. He has a point to prove in an away match. Two boxes ticked, possibly already. Two others to fill. Kuchar is possibly a safe pair of hands, especially on a course that demands a methodical approach.

So, possibly one rookie? The PGA Championship didn’t provide the answers – and probably raised some concerns about Finau – for Furyk. The next few weeks of the FedEx Cup playoffs will have to provide those answers if the USA is to end a winless drought on European soil that goes all the way back to 1993.