Ever made a hole-in-one? The odds are very much against you

The chances of a pro making an ace are long enough, as for amateurs it’s a different story 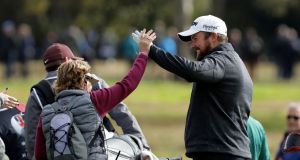 Shane Lowry is congratulated by a walking scorer after he made a hole in one on the fifth during the second round of the British Masters. Photo: David Cannon/Getty Images

Luck? Or skill? I’ve never, ever had a hole-in-one in all my years, which might indicate a lack of both luck and skill, but the odds on having one – as devised by actuaries – suggest it’s a rare enough feat, certainly for the average golfer, with the odds set at 12,500 to 1 during a round.

Perhaps an indicator that skill, rather than luck, is a factor can be deemed from the fact that those same actuaries estimate the odds of a professional player having an ace is as low as 2,500 to 1, albeit – by their trade – professionals play a lot more golf than the average hacker. And they are much, much better.

Anyway, the European Tour season just finished provided evidence that the art of getting a hole-in-one is attainable. Throughout the season, there were no fewer than 34 aces recorded which constitutes a rather good strike-rate and, of those, two were recorded by Irish players: Paul Dunne’s 7-iron to the 17th in the second round of the Trophee Hassan in Morocco, and Shane Lowry’s 8-iron tee-shot to the fifth in the second round of the British Masters at Walton Heath.

Interestingly, only one player – Sweden’s Pontus Widegren – managed multiple aces, and he did so in back-to-back weeks on tour: firstly, holing out with a 6-iron to the 15th in the third round of the Sicilian Open and, then, getting another ace the next week on tour when hitting a 7-iron into the tin cup on the 15th hole of the second round of the Belgian Knockout. Not that those feats brought him too much joy beyond the act itself, as he was subsequently disqualified in Sicily and missed the cut in Belgium.

The traditional handout to players who make a hole-in-one on tour is a bottle of champagne, although that doesn’t quite hold the same sparkly appeal as other prizes: when Andy Sullivan recorded an ace at the 2014 KLM Open in the Netherlands, his out-of-this-world prize was a flight into space (which he never took up, claiming to be a poor flyer). Cars (James Morrison scooped a €100,000 BMW for his ace at Wentworth in 2016), Iberian hams, a year’s supply of beer, crystal and villas have also made the handout list.

The richest hole-in-one prize ever put up at a European Tour event was at the Dubai Desert Classic also back in 2014, when the sponsors offered $2.5 million to the first player to record an ace on the Par 4 17th (playing 325 yards). Nobody managed to claim the huge payday!

As for the average golfer? Well, the rules of golf allow amateurs to win hole-in-one prizes, including cash prizes or cars, only if the ace is recorded while playing a round of golf and “be incidental to that round” which rules out contests held at a driving range or golf simulator.

So, if luck and skill combine, and there is a hole-in-one prize up for grabs during the round, even the most modest golfer can dream on.