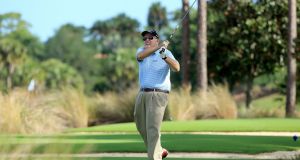 Days from the future past. The scene was the 2004 Women’s US Open at Mount Holyoke in western Massachusetts. Michelle Wie was a 14-year-old schoolgirl from Honolulu, with her father BJ on her bag, her vociferous mother Bo tracking her every move inside the ropes, and her swing coach, the famed David Leadbetter, watching from the gallery. There were better players in the field, just none as box office and few under such pressure. The teen phenom drew the largest crowds for each round, curious fans drawn to see if the adolescent was, as the burgeoning hype pronounced, really going to be good enough to one day compete on the men’s tour.

Within the year, she had turned pro, inked multi-million dollar endorsement deals with the likes of Nike, and been burdened with a thousand unfortunate comparisons to Tiger Woods. She was never going to be his distaff equivalent, on or off the course, and living up to her own ridiculous advance billing was to prove beyond her too. Yet, Wie won a major and four other tournaments, juggled the demands of a slow-burning pro career with graduation from Stanford University (a serious academic institution), and recently took time out to have her first child. The profile is of a remarkably well-adjusted woman who, like every prodigy, endured far too much too young. And is still putting up with unnecessary guff now.

Last week, Rudy Giuliani, on a break from fending off lawsuits and pending criminal indictments (check out his murky legion of Russian associates), told a Wie story on Steve Bannon’s podcast. A lecher’s tale of the day some years ago when he spent a round of pro-am golf, not marvelling at her shooting the best score of the charity event but looking up her skirt every time she went to make a putt. At 76-years-old, the former mayor of New York emitted puerile delight just saying the word “panties”, talking about his erstwhile playing partner while smiling the type of lewd smile last seen on The Benny Hill Show.

“Now, Michelle Wie is gorgeous,” said Giuliani. “She’s six foot tall and she has a strange putting stance. She bends all the way over and her panties show.”

Famously dubbed America’s mayor in the wake of the September 11th attacks on New York, Giuliani has morphed in recent years into America’s demented granduncle, peddling conspiracy theories, dealing outrageous lies, and generally making a complete buffoon of himself in the cause of Trump and Trumpism. No individual in public life has enjoyed as precipitous a fall from grace yet, somehow, some way, he always manages to plumb new depths. Witness this sort of vile nonsense, sideswiping Wie and exposing his own deviancy while trying to pay ham-fisted tribute to his late friend Rush Limbaugh, another member of the playing group that day.

Definitely not the point, but keep wondering why Rudy called this a joke. What is the punchline? pic.twitter.com/VNKgoq92KS

“It’s not you,” he assured Rush who was curious as to the media’s interest in their play. “It’s her panties!”

To put those remarks in context, we must consider the thrice-divorced Giuliani’s recent body of work. A nauseating cameo with his hand down his pants in front of what he believed to be a 15-year-old girl in “Borat: Subsequent Movie Film”. A press conference where a rivulet of hair dye sweated down his face ‘neath the glare of klieg lights. A public hearing during which he farted loudly mid-argument, not once, but twice, his flatulence making as much sense as any of his specious allegations of voting malfeasance. And, not forgetting, his pivotal role in calling the world’s media to hear his risible challenge to the election outcome at Four Seasons Total Landscaping in Philadelphia rather than the more traditional venue of the Four Seasons Hotel.

“What this person should have remembered from that day was the fact that I shot 64 and beat every male golfer in the field leading our team to victory,” said Wie, not even deigning to name and shame the perv. “I shudder thinking that he was smiling to my face and complimenting me on my game while objectifying me and referencing my ‘panties’ behind my back all day. What should be discussed is the elite skill level that women play at, not what we wear or look like. My putting stance six years ago was designed to improve my putting stats (I ended up winning the US Open that year), NOT as an invitation to look up my skirt!”

The dignity of Wie’s take down of Giuliani offered further proof that, unlike so many prematurely thrust into the limelight (witness the trajectory of her wunderkind contemporary Freddy Adu), she has emerged well-rounded and unwilling to suffer smutty fools. In her statement, she also pointed out that Nike make golf skirts with built-in shorts specifically so female players can wear them without having to worry about the proclivities of lascivious peeping toms in galleries or foursomes.

Which means Rudy was not actually at any point looking at her underwear. The degenerate’s faulty memory of the encounter was, like his unhinged claims that Trump was cheated out of the White House, an obscene fantasy conjured from the dark corners of his subconscious where make-believe meets wish-fulfilment.

“Is it okay to tell that joke?” asked Giuliani after he’d finally stopped saying panties. “I’m not sure.”

Message to you, Rudy. It’s not okay. It wasn’t a joke. Truly, America’s mare.