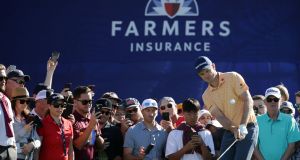 Justin Rose chips from the rough on the 13th hole during the final round of the 2019 Farmers Insurance Open at Torrey Pines Golf Course. Photograph: Jeff Gross/Getty Images

Be careful what you wish for, as the case of Justin Rose and the parting of the ways with luxury Japanese clubmakers Honma would indicate.

Rose was on top of the world rankings in January 2019 when he made the switch from TaylorMade to Honma, citing at the time one of the reasons was the “flexibility” in the deal which saw him commit to using 10 of the manufacturers clubs. It left him free to use putter, driver or whatever in making up the other four as well as his own choice of golf ball.

And if it initially seemed like a seamless move, with his win in the Farmers Insurance Open just a couple of tournaments into the deal, Rose’s slide to number 14 in the world rankings told a story of frustration and that, in the end game, it wasn’t all about money after all.

Rose’s change of heart in using the expensive clubs was evident when he played the Arnold Palmer Invitational in Bay Hill without a single Honma club in his bag and his time in lockdown would seem to have affirmed in his own mind that the clubs simply weren’t for him.

What was due to be a multi-year deal has come to a rather abrupt parting of the ways, less than 18 months in.

“I have enjoyed working with the Honma team and collaborating closely with them to design and develop excellent golf equipment. I was able to see firsthand the innovations that the craftsmen at Honma bring to their clubs. I am hopeful that during our time of partnership, we have laid the groundwork for Honma to continue to expand their brand. We both feel it is the right time to pursue our own paths,” said Rose in a statement issued by his management.

Honma clubs retail at the high-end of the golf retail market, with the TR20 460 driver for example setting consumers back around €700.

Following a period of consultation with clubs, the Irish Ladies Golf Union (ILGU) has made the hard call to cancel all inter-club competitions – including the prestigious AIG Ladies Cups and Shields – for the year due to coronavirus pandemic.

Although golf clubs reopened last week as part of the easing of restrictions, and the ILGU tournament committee considered amending entry conditions, the overwhelming consensus of clubs was that the programme of inter-club events should be pulled from the calendar. A reduced timeframe, availability of courses and public health guidelines were factors cited in making the decision.

The inter-club competitions cancelled include the Cups and Shields, the Revive Active Fourball, the Girls’ Inter-club and the Irish Senior Cup. Of the clubs who responded to the ILGU survey, 34 percent were in favour of playing the Senior Cup with 66 per cent opting for cancellation while 73 per cent of respondents opted for the Junior and Intermediate Cups to be cancelled with even greater margins for the Minor Cup (77 per cent) and Challenge Cup (78 per cent).

The Great North Links Challenge – which has been rescheduled to October this year – has completely sold out. The amateur competition takes place over three of the great links courses: Ballyliffin (Glashedy), Portstewart (The Strand) and Royal Portrush (Dunluce).

“You want me to mark it with one of my US Open medals?” – Tiger Woods rubbing it into Phil Mickelson during their charity match in Florida, which raised $20 million for Covid-19 related charitable causes.

Matteo Manassero lifted the European Tour’s flagship championship, the BMW PGA at Wentworth, to become – at 20 years and 37 days – the youngest winner of the title. To lift the trophy, the young Italian was required to show fortitude as he beat off England’s Simon Khan and Scotland’s Marc Warren in a playoff.

Manassero’s fourth win on the European Tour was seen as confirmation that his was a star in the ascendency. Indeed, after the win, Rory McIlroy tweeted, “You are making me feel old” and added the hashtag “#phenom” for good measure.

A final round 69 saw Manassero match Khan and Warren on 10-under-par 278 but the Scot fell by the wayside at the first hole of sudden-death where he put his tee shot into the trees. Manassero – who’d won the Castellon Masters in 2010 as a 17-year-old and also lifted the Malaysian Open and the Singapore Open – would seal the deal with a birdie at the fourth tie hole.

“It’s been an amazing week. I’ve always felt something special about this place and this tournament. I’m the happiest man in the world right now,” said Manassero of lifting a fourth European Tour title before his 21st birthday. Incredibly, he has since failed to add to that career total.

In the Bag: Peyton Manning at The Match II

Q
In a strokeplay competition, Player A is asked by Player B to leave her ball in place on the putting green to act as a backstop. Player B is unsure of the rules situation and agrees to the request. Is this permissible?

A
Rule 15.3a/1 covers this situation in strokeplay (Breach of rule for leaving helping ball in place does not require knowledge) and does not depend on whether the players know such an agreement is not allowed. Once the stroke is made with the ball in place, both players get two penalty strokes for their actions. The same outcome would apply if the player whose ball was near the hole offered to leave the ball in play to help the other player and the other player accepted the offer and then played.

PS: In matchplay, a player may agree to leave their ball in place to help the opponent since the outcome of any benefit that may come from the agreement affects only their match.

1 Bundini Brown: The man who invented ‘float like a butterfly, sting like a bee’
2 Worst sporting moment: White knuckle ride on a hate-filled night at Windsor
3 Munster cancel training after academy player tests positive
4 Manchester City’s European ban lifted and fine reduced to €10m
5 America at Large: George Karl lifts the lid on drug use within the NBA
Real news has value SUBSCRIBE