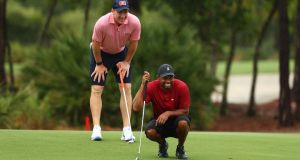 The charity golf match pitting Tiger Woods and Peyton Manning against Phil Mickelson and Tom Brady on Sunday figured to be good TV. It had big names, long-standing rivalries spanning two sports, an intriguing combination of talents and the prospect of the unforeseen.

To say it did not disappoint would be an understatement. Because, seriously, did anyone truly expect these developments? Right from the start, Brady played so horrendously - in one 30-minute stretch he put consecutive tee shots in the woods, a pond and on a cart path next to the out of bounds - that he was mocked by guest TV analyst Charles Barkley, whose golf swing is as bad as any ever captured on video. Brady looked more disgusted than he had after his final NFL pass last season, and that was a pick-6 in a play-off rout.

Twitter followers in the 44 states outside New England were jubilant and could not type their taunts of Brady fast enough. A grinning Bill Belichick must have felt vindicated for giving up on an aging athlete clearly on the decline. Brooks Koepka, the world’s third-ranked golfer, who was watching from his Florida home, posted to Twitter that he would donate $100,000 to coronavirus relief efforts if Brady parred a hole on the front nine.

Then, one hole after even Woods taunted Brady for finally hitting a fairway off the tee - except not on the hole they were playing - Brady hit a wedge shot from more than 100 yards in the seventh fairway that bounced on the green and rolled backward into the hole.

“Shut your mouth, Chuck,” Brady yelled in response to Barkley’s commentary, which in this exhibition was delivered directly into an earpiece Brady was wearing. “Brooks owes me a little money,” Brady crowed. Oh, yes, and then, with his back to the television cameras, Brady bent over to retrieve his golf ball from the seventh hole and split his pants for all to see. Do you think that elicited a response on social media? Brady’s dramatic shot also won the hole at a time when the Brady-Mickelson team was being trounced. And magically, Brady suddenly started to play better. The competition at the Medalist Golf Club in Hobe Sound, Florida, grew close and had juice with genuinely biting, but funny, banter between the participants.

And it went down to the final putt on the last hole with Woods and Manning winning, 1-up. Moreover, with the help of Brady’s comeback, and the solid play and winsome personality of Manning, Sunday’s match provided more than four hours of entertaining live sports that will most likely be a major television ratings success. The event was originally billed as a rematch of sorts, pitting Woods and Mickelson two years after they played a boring head-to-head contest on Thanksgiving weekend in 2018, on a pay-per-view broadcast that was riddled with problems. Sunday’s reprise was saved by the NFL interlopers, which really might not have been a surprise since everyday golfers love to imagine how they would handle the pressure of playing with top golf pros on national TV.

Hint: We would look like Brady before the seventh hole. Yes, to be sure, Brady and Manning, two of the most accomplished athletes of the past 25 years, are not average people plucked off the street. But as golfers they sure looked like it from time to time. And watching Woods and Mickelson try to work with that level of golf expertise to win a match was fascinating.

And here are two discoveries from watching that experience unfold: Woods is not warm and fuzzy, but his golf game and surgically rebuilt back are both in terrific shape. Woods rarely missed a shot of any kind and consistently hammered his driver, a sometime nemesis, accurately and with power. Woods’ swing was fluid, he walked with ease and he frequently bent and stretched without any apparent discomfort. His short game could be dazzling.

Mickelson thinks he is “Phil” Nye the Science Guy. Mickelson’s dissertations to Brady on how to stroke a 10-foot putt would go on for about two minutes with detailed explanations about how the shading of a green surface reflected the grass grain and would affect the rolling of a putt. It was great stuff for golf geeks, but by the end of the match it was as if Mickelson was trying out for a part on “The Big Bang Theory.”

The match was not always the finest promotion of social distancing. The golfers stood less than 6 feet apart from time to time. There were occasional fist bumps. Once or twice, a golf ball was snatched from the green and flipped to a partner.

Those are no-nos and not hard to avoid. Since the PGA Tour expects to resume next month, golf officials need to remind the players they are setting examples for millions of recreational golfers around the world. Everybody is happy to be back on the golf course again, but minding the little things about playing safely will ensure that that opportunity doesn’t go away.

But overall, Sunday’s match was a welcome reminder of why we watch sports. There was the unexpected, which was Brady, often called the greatest player of all time in a dangerous sport with countless fast-moving parts, feeling humiliated because he couldn’t control a little white ball that wasn’t even moving as he swung at it. Then, for Brady, there was startling, unpredicted revival and redemption.

Everyone, even his opponents, smiled. The competition and camaraderie continued. - NYT