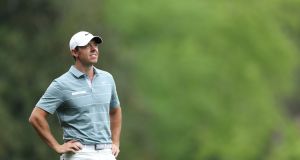 Rory McIlroy will look again at his build-up to next year’s Masters as he looks to complete the Grand Slam. Photograph: David Cannon/Getty Images

Nobody said it would be easy, far from it, and Rory McIlroy drove away down Magnolia Lane believing his next attempt at completing the career Grand Slam, which year on year will bring him back to Augusta National, may require some tweaking to his schedule if he is to ever succeed.

Although he has consistently stated that playing competitively the week before a Major is his preference, which is a reason offered for skipping this year’s DDF Irish Open in favour of the Scottish Open, the Masters tournament has been an exception to such a philosophy. Maybe not any longer, though.

The Northern Irishman admitted he will likely have a fresh look at next season’s run-up to the 84th Masters. It will most probably mean adding the Valero Texas Open the week before on to his itinerary, but he will also play the WGC-Dell Technologies Matchplay, which would mean three successive tournaments finishing with the Masters.

“If anything, I just wasn’t quite as sharp as I have been in previous weeks. I played quite a bit leading up [to Augusta], but obviously took the week off last week. It’s not that I didn’t play or practice and I wasn’t trying to get myself ready. But I think I realised over the last couple of years the best way for me personally to get ready for tournaments is to play the week before, usually,” admitted McIlroy.

In asking him if that meant losing the Matchplay from the schedule, McIlroy responded: “No . . . three in a row has actually been okay for me at times, as well.”

Indeed, McIlroy will also have a three-week stint later this season when, after losing the Irish Open from his itinerary, he will play a stretch that takes in the Scottish Open–British Open–WGC St Jude Invitational.

As for this latest bid to add a green jacket to his collection? Unlike previous years, this won’t go down as a missed opportunity. He never felt the heat on this occasion. That he finished on the ninth green, far from the madding crowd, after a two-tee start to Sunday’s final round said it all, really.

McIlroy’s next appearance on tour will be in the Wells Fargo Championship at Quail Hollow in a fortnight’s time. “I’ll move on from this pretty quickly,” he insisted, of a summer ahead that takes in Majors at Bethpage (US PGA next month), Pebble Beach (US Open in June) and Royal Portrush (the 148th Open in July).

McDowell could take the FedEx road back to Portrush

Graeme McDowell – a winner in the Dominican Republic last month but who didn’t earn a ticket into the Masters – resumes tournament play at this week’s PGA Tour stop, the Heritage Classic at Hilton Head.

McDowell has moved up the FedEx Cup points table of late and will be more aware than anyone that there is a carrot, an exemption for Royal Portrush in July, available off that particular category to the top-20 players in those standings ahead of the championship on his home track. McDowell is currently 41st in those FedEx standings, having dropped three place following the Masters.

Shane Lowry has received an invitation to also play in Hilton Head, after digesting in recent days poor play and a missed cut at the Masters. “I need to try and find something. The funny thing in this game is there is always a point before you start playing good, there is a little thing you find. I don’t know whether it is mentally, physically or in your game that triggers it off.”

McDowell, a past winner, Lowry and Séamus Power are the three Irishmen in the Heritage, which is an invitational tournament.

Tiger Woods fell to 1,199th in the world rankings at his low point; the Masters win jumped him to sixth in the latest standings. Woods started the year in 13th.

“We already knew he was back, but I think he just put the exclamation point on it!” – Brooks Koepka on Tiger Woods’s return to winning Majors again.

“I actually told Tiger that I think they are hideous . . . but I can promise you that probably half a million are going to sell tomorrow” – Xander Schauffele on Woods’s mock turtleneck shirt.

Big “well done” from me to @TigerWoods! Am so happy for him and for the game of golf. This is just fantastic!!! – The Golden Bear to the big cat.

Man, I got goosebumps. Special player and not much else to say except I hope he beats Jack’s record and cements his #GOAT tag. I believe he is, but that will finish the conversation. #19 – Graeme McDowell doesn’t sit on the fence.

Remarkable day in golf. You could see it in his demeanor, his swing, and especially his eye – David Duval

Unbelieveable day @TheMasters Honour to watch @TigerWoods back to his best – Wayne Rooney got to witness history up close.

Very few people really know what @TigerWoods has been thru to get back to this point. So cool seeing him with Tida, Sam, Charlie, Erica and the rest of the team behind 18 green. Couldn’t be happier for him! What a great day for golf! #TheMasters – Rory McIlroy knows the background.

In the Bag – Tiger Woods, The Masters

Q
In playing his tee shot, Player A’s ball hits an overhanging tree branch and the ball ricochets back over his head to a position some 50 yards behind him in an unplayable lie. He announces to the other players in his group that he is taking stroke-and-distance relief with a penalty of one stroke and playing again – effectively his third shot – from the tee. Is he entitled to do so?

A
Yes. Under Rule 19.21/1, if a ball comes to rest farther from the hole than the spot from which it was played, such relief can still be taken. This rule also covers a situation on the putting green, say where a player hits a downhill putt off the putting green and the ball rolls off the green into a bad lie or into a penalty area. The player may play again from the original spot on the putting green under penalty of one stroke.