Different Strokes: Ian Finnis an easy bet for caddie of the year 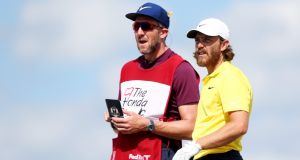 Tommy Fleetwood with his caddie Ian Finnis during the Honda Classic in March. Photograph: Matt Sullivan/Getty

No guessing who is in line to scoop the award as the best caddie for 2020: that’d be Ian Finnis, the regular bagman for Tommy Fleetwood who has been playing a blinder in raising funds - through golf memorabilia - to help support hard-hit caddies who have been left without any looping duties.

Finnis has in the past raised funds through online auctions and raffles for cancer causes but has kept his latest efforts a bit closer to home in organising a number of raffles to support other caddies, with funds to be distributed through the European Tour Caddies Association.

With more then €40,000 (£35,000) raised through raffling off such items as a 2019 Masters flag (signed by Tiger Woods) and a Phil Kenyon-designed putter, Finnis has put his downtime to very good use.

“Me and my family struggled early on in my caddying career so we know how hard it is at times and especially now,” explained Finnis of his bid to support others. “This is a tough time for everyone at the moment. Some caddies will really be feeling this with families and possibly no wages for three months.”

Finnis once aspired to be a tour professional himself but settled for the next best thing in taking on the bag carrying duties in early 2016 for his friend, during which time Fleetwood has risen to number 10 in the world rankings and claimed four tour wins in their time together. In that time, Fleetwood has also twice finished runner-up in Majors, finishing second in the 2018 US Open at Shinnecock Hills and also to Shane Lowry in last year’s British Open at Royal Portrush.

April 14th 1991 - For sure, it was a case of the last man standing when Ian Woosnam - with the world number one ranking as an added weight on his shoulder - claimed his only Major titlte, the 55th Masters tournament.

The image of Woosie sinking to his knees whilst his closed fist punched the air in delight on the 18th green became an iconic one of that 1991 tournament, but the Welshman had shown his nerve down the stretch to eventually claim a one stroke winning margin over runner-up Jose Maria Olazabal, who’d bogeyed the closing hole after going from fairway bunker to greenside bunker, with a quartet of players - Ben Crenshaw, Steve Pate, Lanny Wadkins and Tom Watson, who double-bogeyed the 72nd hole - all a stroke further back in tied-third.

Of sinking that seven-footer for par on the finishing hole to win, Woosnam said: “I told myself, ‘Now is the time to show your mettle’.”

That year, there were only eight European players in the field. Woosnam, who had made his PGA Tour breakthrough the previous month when winning the New Orleans Classic, was outside the top-20 after an opening round 72 but followed up with rounds of 66 and 67 to take a one stroke lead over Watson into the final round for a 72 for 277.

Justin Thomas - the 2017 US PGA champion - has broken out of his self-imposed social media lockdown with a wide-ranging session with his fans:

“Gave up twitter for lent, but I’M back!!! Who’s feeling a little Q&A today?” tweeted JT.

“How do you expect Augusta to play in November compared to the usual April feel?” he was asked by someone bearing the handle of The Truth.

“It could play VERY long. Possibly quite a bit softer and slower too,” came the reply.

“Royal Co Down or Portrush?” was another.

“What’s the best advice for a dad raising a very talented 8-year-old golfer,” asked the judge.

“Let him enjoy it. Don’t push too hard. Something my parents did amazing with.”

“We had it all. I know it’s very different than having past champions (attending), so under the circumstances with the way the world is right now, to be able to do it at home with my family was a lot of fun” - Tiger Woods on having his Masters Champions’ Dinner menu (fajitas, sushi and milkshakes) served as a family dinner instead.

11 - The number of weeks until the next scheduled tournament on the PGA European Tour which the BMW International, pencilled in as things stand for the week of June 25th-28th in Munich.

“Sad to hear of Doug Sanders passing. in Dec ‘02 I met him in a bar in Dublin where he introduced himself and said an incredibly humbling thing. ‘Paul you and I will have one thing in common for the rest of our lives - PUTTS - you for making and me for missing’.” - Paul McGinley, who holed the Ryder Cup winning putt in 2002, recounting his encounter with Sanders, forever remembered for missing a short putt on the final green of the 1970 British Open at St Andrews and ultimately losing to Jack Nicklaus in a play-off.

“I’ll never take anything for granted again, 9 holes with the lads, dinner with Wendy in our favourite restaurant, a pint in my favourite pubs with friends. Going for lunch and talking garbage all day with loads of coffee. All of my favourite things and can’t do any. Strange times” - Shane Lowry feeling the effects of lockdown (in Florida).

“So this happened yesterday” - Stephanie Meadow showing the sparkler on her engagement ring.

“We’re blessed to have welcomed Enzo Akins Garcia on Friday April 10, at 6.25pm. Enzo and Angela are both doing great, and Azalea is very happy to be a big sister . . . .” - Sergio Garcia found something to cheer him up on what would have been Masters Friday.

Q - In a match, Player A has the honour and plays first from the teeing area and hooks his ball into a wooded area which also has an out-of-bounds fence running down the boundary. His opponent, Player B, then plays a shot which is hooked into a similar area and nominate that he wishes to play a provisional shot. On Player B hitting his next tee shot down the middle of the fairway, Player A then announces that he also wishes to play a provisional ball and asks that Player B’s stroke be cancelled. Player B insists he is not required to cancel the stoke and play again. Who is right?