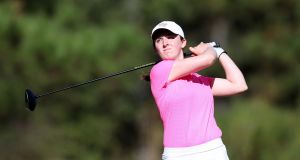 Lauren Walsh is set to become the third Irish player inside the top-50 on the world amateur rankings after her impressive win in the Griffin Women’s Amateur tournament on the United States collegiate circuit, a breakthrough victory stateside for the 20-year-old from Co Kildare.

Walsh, who is on a scholarship to Wake Forest, finished five strokes clear of nearest pursuer Becca DiNunzio, of Virginia Tech, to claim the title at Grandover Resort in North Carolina.

Ranked 53rd in the world prior to the tournament, Walsh’s upward trending will be confirmed when the R&A release the updated rankings later this week. Olivia Mehaffey and Julie McCarthy, also both stateside on college scholarships, are the other Irish girls in the world’s top-50.

Having returned to Wake Forest for the autumn semester, Walsh’s college team has belatedly returned to the competitive circuit.

In a piece with Golfweek magazine ahead of the tournament, Walsh outlined how the college team has responded to the impact of Covid-19: “We now have our temperature checked every morning before using our athletic facilities and we are regularly monitoring our symptoms on an app on our phones. There are obviously a lot of other regulations on campus that we have to follow with masks and other protocols but it has honestly become the new normal. Besides all the new Covid-19 regulations, much of our day-to-day schedule still looks the same. We have early morning workouts, then class (which is online for the most part), followed by practice. Then it’s eat, sleep and repeat!”

Walsh is one of a number of players coming off the ILGU conveyor belt of talent who opted to head stateside on scholarships – Annabel Wilson and Sara Byrne are also in the collegiate system – and the Castlewarden golfer is very much in the reckoning for Curtis Cup honours next year for the delayed match at Conwy which has been rescheduled for August.

Jason Day has another injury to add to his long list. This time, the Australian – who has suffered ailments ranging from back to wrist and episodes of vertigo through his career – has to deal with a neck injury, which caused him to withdraw from the CJ Cup after just two holes of his final round.

Day, a former world number one, remains hopeful that this latest injury won’t keep him away from action too long. In fact, he has remained in the field for this week’s Zozo Championship and explained to pgatour.com: “My back had been a little jammed up and hurting most of the week, so I think maybe I did something to my neck while trying to compensate for that.”

8-2-4: Xander Schauffele’s runner-up finish to Jason Kokrak in the CJ Cup moved him further ahead of his contemporaries in that unwanted category. It was his eighth runner-up finish on the PGA Tour over the last four seasons, the most of any player in that time period. Dustin Johnson, Brooks Koepka and Tony Finau are all locked together on six apiece over that same span.

“It’s fun for me to come out here and play well and this is a good start for me as I try to build a little bit of momentum heading to Augusta in about a month” - Phil Mickelson, after making it two wins from two starts on the Champions Tour. Lefty closed out with a final round 65 for a total of 17-under 199 to finish three shots clear of runner-up Mike Weir in the Dominion Energy Classic in Virginia.

Singer Justin Timberlake – who was tournament host of the Shriners Hospital for Children Open at TPC Summerlin – was greenside on the 18th hole to congratulate Marc Turnesa as the American, from a family with a great golfing pedigree, won what would prove to be his only PGA Tour victory.

Turnesa, in his rookie season, closed with a 68 for a total of 24-under-par 263 to win by a stroke from Matt Kuchar and his career-best cheque of $738,000 jumped him from 138th to 75th on the money list and gave him an exemption, which meant he avoided a trip to Q-School.

“I don’t really feel like I’m carrying on a name. I guess I am without even thinking about it,” said Turnesa whose career would be curtailed by a recurring back injury.

“PGA Tour winner!!!! Thankful to my family, team, @PGATOUR and all of my fans!!!! Against all odds in Vegas!!! #WinnersCircle #PGA #Victory” - Jason Kokrak on his breakthrough career win at The CJ Cup, which came in his 233rd tournament appearance.

“Go Kokrak Go. First of many…..Congrats” - none other than Freddie Couples coming out as a Kokrak fan.

“Felt good to get back out there this week at the CJ Cup, thanks to everyone who made it possible during such a challenging year” - Brooks Koepka on returning to competitive action after two months on the sideline due to injury.

Q: On finding his ball, which is lying in the rough, Player A takes a club and presses down on the grass behind his ball which is in play and improves the lie while also accidentally moving the ball as well. This single act (of pressing down the ball) has breached two rules: Rule 8.1a (actions that improve the conditions affecting the stroke) and Rule 9.4b (Lifting or deliberately touching ball or causing it to move). What is the outcome?