Rory McIlroy takes to the desert to warm up for Augusta 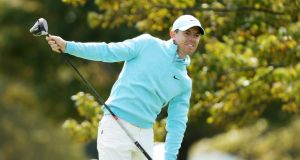 Rory McIlroy will be back in action at this week’s CJ Cup in Las Vegas. Photograph: Gregory Shamus/Getty Images

Rory McIlroy hasn’t played since the US Open at Winged Foot last month but returns to competition at this week’s limited-field CJ Cup – which has moved from its traditional home in South Korea to be staged in the desert at Las Vegas – where he will be joined by Shane Lowry for the no-cut tournament that has a purse of €9 million.

McIlroy, the world number four, has pencilled in the CJ Cup and next week’s Zozo Championship at Sherwood Country Club in California as back-to-back tournaments in sharpening up his game ahead of next month’s Masters tournament at Augusta National where he will again seek to claim the career Grand Slam.

And it would seem that McIlroy has been seeking to add some firepower to his golfing armoury, with the 31-year-old Northern Irishman recently posting footage of a drive that hit a hugely impressive 191 miles per hour in ball speed with the addition of a new Fujikura Ventus Black shaft to his TaylorMade driver. He is expected to give the new shaft an outing at the CJ Cup, an event limited to 78 players.

McIlroy will be looking for a strong finish to his year’s work, most obviously with Georgia on his mind. And his build-up to the Masters has been helped with the PGA Tour’s decision to bring the CJ Cup and Zozo Championship away from their traditional bases in Asia in a once-off strategy as part of dealing with Covid-19.

Lowry has availed of a late sponsor’s invitation to get into the field as British Open champion – other players to require invites were Tommy Fleetwood, Sergio Garcia and Ian Poulter – and, although his immediate schedule up to the Masters remains uncertain, the Offaly man said he would “figure it out” in the coming weeks.

Graeme McDowell, though, failed to get an invitation into the CJ Cup and, after showing some decent weekend form in the BMW PGA at Wentworth, will work on his Masters preparations back at home in Orlando.

Tyrrell Hatton’s upward trending – he moved into the top-10 in the world for the first time following his win in the BMW PGA Championship – has put the Englishman’s sights firmly on progressing his career with WGCs and Majors very much on the agenda going forward.

Hatton, part of the Modest Golf! stable run by singer Niall Horan, was ranked 32nd in the world at the start of the year and claimed a breakthrough win on the PGA Tour at the Arnold Palmer Invitational ahead of the 2019/2020 season’s Covid-19 interruption. Since its resumption, he has claimed four top-10s in nine outings, including the win at Wentworth and he will aim to maintain that momentum with appearances in Las Vegas this week and California next week.

“I’m playing Vegas and then the following week in LA and then I’ll have a week off and I’ll do Houston and the Masters,” said Hatton of his upcoming plans. “I’m going to come home [after the Zozo] because Emily [his fiancée] is staying home, so if I didn’t come back I wouldn’t see her for six and a half weeks, which isn’t too appealing.”

Of eyeing even bigger events, and demonstrating an ever-growing maturity which has been influenced by linking up with veteran caddie Mick Donaghy, Hatton added: “I’ve been fortunate to win a European Tour event. I’ve been fortunate to win a Rolex Series event. And on the PGA Tour. So I feel the next step for me, it would be nice to obviously win a WGC and then a Major. That would be very special. It is very hard to win tournaments. Golf is a funny game. you have to go out each week, try your best and some weeks work out better than others.”

Brooks Koepka, the former world number one who has been sidelined for two months due to injury, returns to competition this week at the CJ Cup.

On the European Tour, there are five Irish players – Pádraig Harrington, Cormac Sharvin, Jonny Caldwell, Gavin Moynihan and Niall Kearney – included in the field for the Axa Scottish Championship on the Fairmont links at St Andrews.