Royal Dublin man produces a bogey-free final round of 67 at Sandy Hills, Rosapenna 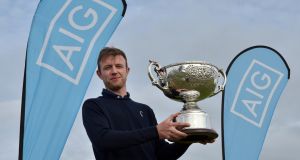 Hugh Foley became the first Royal Dublin player to win the title for 99 years when he romped to a ten-stroke win in the AIG Irish Amateur Close Championship at Rosapenna.

A full-time amateur, the 23-year-old Dubliner felt it was “destiny” that he should etch his name on the trophy just 15 months after he was forced to pull out on the eve of the Championship at Ballybunion when his father, cardiologist Prof David Foley, fell seriously ill.

“It’s incredible,” said Foley, who was tied for the 36-hole lead with Galway Bay’s Andrew Hickey on one-under par, two clear of the field, before closing with a bogey-free 67 on the Sandy Hills Links to win by ten strokes from Roganstown’s Patrick Keeling and Carton House’s Marc Boucher on six-under par.

“I really didn’t let myself think ahead at all. I only checked the scores on the 18th fairway there. That’s when the nerves subsided. It’s unbelievable to get your name on that trophy. It’s incredible.”

Foley headed to Ballybunion for last year’s ‘Close’ with high hopes having led the qualifiers in the South of Ireland at Lahinch only to be forced to withdraw on the eve of the first round when his father fell ill at the Galway Races.

“I was thinking that and trying not to get ahead of myself on the course,” said Foley, who teamed up with his father, now happily recuperating, to win the gross in the World Father and Son Invitational at Waterville in August.

“At the time I was playing similar golf. I had played great in Lahinch and maybe it was destiny to bring that golf game with me this week. I am just delighted.”

As Hickey started with a quadruple bogey eight and then double bogeyed the second before eventually carding a 78 to tie for fourth with Baltinglass’ Joseph Byrne, Royal Dublin’s Richard Knightly and Kinsale’s Gary Ward on five-over, Foley hardly put a foot wrong.

Opting to use the driver just four times over the three rounds, he birdied the first, fourth and ninth to go six shots clear, then picked up further shots at the 13th and par-three 16th to win by ten strokes, compiling a near perfect round.

“I had a really good feeling about the week, I don’t know why,” added Foley, who is the first Royal Dublin player to win the “Close” since Captain E.F. Carter in 1921. “It was just one of those weeks where it feels great and I am delighted.”

As for the future, he’s happy to remain amateur for now after finishing third place in the Bridgestone Order of Merit table to secure a place on Golf Ireland’s first men’s High Performance Panel for 2021.

Dun Laoghaire’s Alan Fahy topped the table from Boucher with the top three finishers in the points list automatically selected for the Irish panel.

“If this year was a normal year, I would have gone to Q-School as an amateur for experience,” Foley said. “Now with this and all the tours and travel up in the air, I will stay put for the time being. I am really enjoying it. I think it is a great life.”