Different Strokes: Day looks in the mirror and sees the light 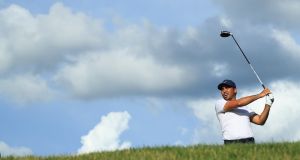 Jason Day drives from the 11th tee during the second round of the Workday Charity Open at Muirfield Village Golf Club in Dublin, Ohio. Photograph: Sam Greenwood/Getty Images

Former world number one Jason Day – currently 58th in those rankings – is finally seeing some light at the end of the tunnel in his bid to return to the winning enclosure.

The 33-year-old Australian hasn’t won on tour since the Wells Fargo Championship in 2018, all of 26 months ago, and a tied-seventh finish at the Workday (where he had seven water balls over the four days) was only his second top-10 finish so far this season.

And Day didn’t have to look too far to find the reason for a poor run of form. In fact, a look in the mirror was all that was required.

“It’s funny, when you’re going through a bit of a rough patch, you start to blame other things other than yourself. And sometimes you’ve just got to have a hard look at yourself and understand the attitude isn’t helping the game out at all,” he said.

“So, you may as well try and fix that . . . I felt like I was trying to play the victim role a little bit too much, especially because I haven’t played that great coming back after the break. I just don’t want to play that role. I want to take it for what it is and just get on with it.”

Day’s new philosophy will get another chance to impress again at the Memorial, where he again has the benefits of home comforts given he resides in the Columbus area.

The guttural “C’mon” roared by Justin Thomas as he nailed a long putt was a rare breaking of the silence during his duel with Collin Morikawa in the Workday tournament at Muirfield Village but that reliance on players to provide some on-course audio is set to extend to the end of the PGA Tour season.

Originally, this week’s Memorial tournament – also at Muirfield Village – was set to welcome in a limited number of spectators (4,000 daily) but the best laid plans and all of that have been thrown aside due to the ongoing Covid-19 pandemic and all of the remaining events of the 2019/2020 season will continue to be played behind closed doors.

It means that the Memorial, 3M, WGC-St Jude, Barracuda, US PGA Championship, Wyndham, Northern Trust, BMW and the Tour Championship itself – which closes the restructured schedule on September 7th – will all be played without spectators.

It remains to be seen if the US Open at Winged Foot in September or the Masters tournament at Augusta National in November will have any fans on the course.

There are three Irish players in the field for the Memorial Tournament at Muirfield Village on the PGA Tour: Rory McIlroy, Graeme McDowell and Shane Lowry. The prize fund there, is €8.2million.

There are four Irish players in the field for the Euram Bank Open at Ramsau in Austria on the European Tour: Gavin Moynihan, Niall Kearney, Michael Hoey and Robin Dawson. The prize fund there, is €500,000.

“It’s been different, the first time since 2005 – so, 15 years . . . hopefully this is the one and only time. No matter what I say, I do enjoy the caddie’s company,” said Marc Warren of carrying his own bag en route to victory in the Austrian Open after his regular caddie, Ken Herring, was unable to fulfil his duties due to a delay in getting his coronavirus test result.

At just 19 years of age, Jordan Spieth announced his arrival as a tournament winner with a bang. The youngest winner on the PGA Tour in 82 years, the Texan earned his breakthrough victory in the John Deere Classic where he did it the hard way, outduelling defending champion and seasoned campaigner Zach Johnson at the fifth hole of a sudden-death playoff.

Spieth, who had special temporary status on tour at the time, only managed to force his way into the playoff when holing out with a bunker shot on the 18th hole, a shot he described as “the luckiest shot I’ve ever hit in my life”.

Spieth admitted he didn’t hit the shot as intended, hitting it thin and then watching as it took one bounce, hit the flagstick and dropped into the hole. It gave the teenager a closing 65 for a total of 19-under-par 265, although that didn’t look sufficient until Johnson opened the door by bogeying his final hole of regulation. “I’m extremely fortunate,” claimed Spieth of his first win on tour.

Congrats to Collin Morikawa on winning the @Workday Charity Open! His golf game at Muirfield Village GC matched his beautiful swing. Holing that 24-foot putt on top of Justin’s 50-footer in the playoff was unbelievable. I expect many more @PGATOUR wins from the young Californian! – Jack Nicklaus impressed with Morikawa’s win as his place.

Muirfield Village milkshakes never tasted so good! Exciting week, tough battle, but couldn’t be happier to get this win – Collin Morikawa went for the chocolate milkshake.

A
If, in starting the play of the hole in matchplay, a stroke made from outside the teeing area is not cancelled, Rule 61.b(1) provides that the player plays the ball as it lies. However, in this situation, since the player’s stroke is not cancelled, and the ball is out of bounds, she must take stroke-and-distance relief by playing a ball from where the previous stroke was made. However, as the stroke was not made from inside the teeing area, the ball must be dropped, not teed (see Rule 14.6b).