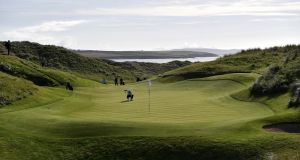 A view of Ballybunion Golf Club. All clubs in the Republic of Ireland closed on Wednesday night for six weeks. Photograph: Charles McQuillan/Getty Images

If we’re to be entirely, brutally honest, nobody truly saw a full closure of golf courses in the Republic of Ireland coming. As inevitable as it is that night follows day and day follows night, there didn’t seem such an inevitable outcome on this particular topic. Maybe play being restricted to members who lived within the 5kilometre travel limit, at worse. Not a complete lockout!

Of course, the biggest picture of all is the fight to overcome Covid-19 in the community. It has become the ultimate numbers game.

Yet, golfers – and golf clubs – had hoped that a number of contributory factors would, even as the evenings closed in and timesheets became ever more jampacked, combine to keep some golf going. Factors such as that it is played outdoors and is invariably, especially given the wild shotmaking of so many of us, socially distanced; and, also, the physical exercise and mental health attributes it provides for those who line up a putt, or splash from a bunker, or mutter some obscenity under their breath as another ball disappears in a water hazard. And then tee-up at the next hole with the expectation of hitting it like Tiger or Rory or DJ or Leona.

Such trials and tribulations are all part and parcel of the game, with its accessibility to both young and old and all those in between making it tick so many boxes in terms of providing mental and physical health in these times. As the singer, musician and author Niall Breslin, or Bressie if you will, observed on hearing the decision: “(It) is not the right call . . . . it’s been so important for so many people I know.”

In the North, by the way, golf courses remain open (for now), which only underscored the different approaches to the one problem in the two jurisdictions.

Indeed, the frustration bordering on anger at the decision to close all courses in the Republic was evident on the various social media platforms which again, if we’re honest, was not unexpected especially given how the whole process had been drawn out. On Monday night’s announcement of the introduction of Level 5 restrictions, confused messages had come from different political voices: golf was on the list of activities said one; golf wasn’t, said another.

But the rules of the game were unclear; and whatever lobbying subsequently went on to advocate golf’s differences from team sports and contact sports fell on deaf ears.

Or was it that golf didn’t have a strong enough voice? After all, as clubs had demonstrated in recent months, golf could be played with stringent measures in place: flagsticks left in the hole; players arriving in cars and going straight to the first tee and then back to the cars on completion of their rounds, with scores entered on digital scorecards; no handshakes, no fist-bumps, nothing.

That the bad news for players, good and bad, was finally issued by the GUI and ILGU at 4.45pm – “following intensive engagement over the past 48 hours” and with regret - added to the sense of letdown. In effect, club professionals had only hours to lock up their doors and clubs in the Republic were again obliged to update their membership that golf was off the agenda for at least six weeks. There remains a belief that it could at least have been handled in a better way, that clubs could have been updated along the way rather than wait for the guillotine final act.

I was in contact with a large number of club officials and employees after this latest close-down order came about. To a man and woman, most were caught off-guard by the full, knockout blow delivered. All felt it was an unjustified move.

“Golfgate didn’t help us,” said one, referring to that Oireachtas Golf Society post-golf hotel dinner which gave golf a bad rap, and which was totally at variance with the measures put in place by golf clubs in ensuring public health safety, “but the situation where contact sports and schools remain open heightens people’s disgust with the regulators who have sanctioned this closure.”

And there is an anomaly at the very root of all this. I know. Last night my daughter could go football training in her pod of 15 players on one side of a pitch. Tomorrow, she can’t go golfing – in a group of three or four – on a golf course of over 200 acres. Where’s the sense in all of that?